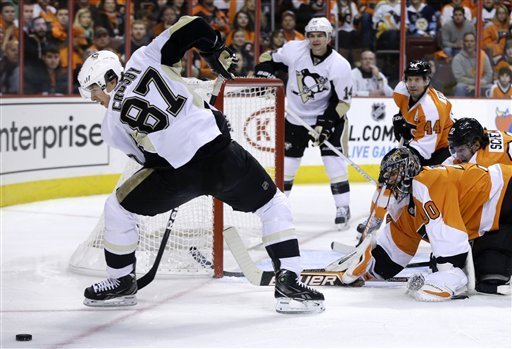 Thoughts, observations and statistics from the Penguins’ victory over the Flyers on Saturday afternoon.

One down and 47 to go, but the early returns were positive as the Penguins knocked off the Philadelphia Flyers in what was a hard fought road victory at the Wells Fargo Center. The Penguins played their best hockey during the first period, fell off a bit during the second and played fairly evenly with the Flyers during the third.

They were buoyed by the strong goaltending of Marc-Andre Fleury throughout the affair, as the 2003 first overall draft pick became the all-time franchise leader in victories with the win. Fleury made 26 of 27 saves, which included several sparkling stops as the Flyers were pushing to tie the game up late in the affair.

Here are a few of the key stats, thoughts and observations from the game in case you missed it.

Overall the Penguins picked up a huge road victory, one that helped ease the sting of last spring’s first round playoff exit at the hands of these same Flyers. The birds are back in action, as they travel to Madison Square Garden to face the New York Rangers this evening. We’ll be back with a “game 2” update later.

I’ll be on SiriusXM’s NHL Network Radio this afternoon talking Penguins/Flyers, Penguins/Rangers and much more at 5:45pm EST.