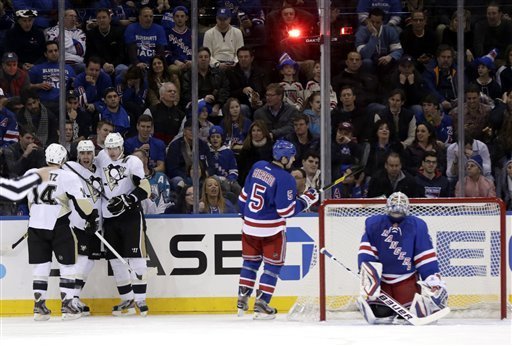 Game 2: A collection of thoughts, stats, and observations from the Penguins’ victory over the Rangers on Sunday evening.

The Penguins kept things moving in the right direction with another huge division victory on Sunday evening at Madison Square Garden, as they knocked off the New York Rangers 6-3. Pascal Dupuis notched the game winning goal on a second period power play off of a slick feed from Evgeni Malkin, James Neal picked up two more goals and Tomas Vokoun picked up his first victory in a Penguins’ uniform.

The win, the Penguins’ second in a row, puts them in first place in a very competitive Atlantic Division after the Rangers, Flyers and Islanders failed to pick up a victory. The New Jersey Devils are in second place with 2-points after beating the Islanders 2-1 on Saturday.

Here are a few key stats, thoughts and observations from the victory last night in case you missed it.

After notching a pretty successful weekend that saw the Penguins sit through the home openers of two rivals, they will finally have a chance to take part in their own when they return to the CONSOL Energy Center on Wednesday evening.