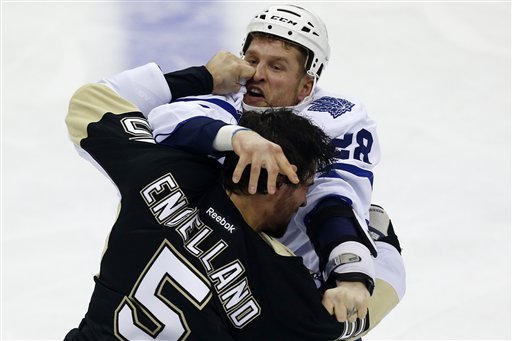 Game 3: A collection of thoughts, stats, and observations from the Penguins’ loss to the Maple Leafs on Wednesday night.

The Penguins entered their home opener against the Toronto Maple Leafs on Wednesday night riding a wave of success that saw them earn four huge divisional points against the Flyers and Rangers over the weekend. Sadly that success didn’t continue for them and they earned their first loss of the season.

James Reimer, making his first start of the season for the Leafs, made 28 saves, Nikolai Kulemin picked up three assists and former Flyers forward James van Riemsdyk notched his first three points (2g, 1a) of the season in the victory.

The Penguins’ got goals from Evgeni Malkin and Sidney Crosby, but were never able to able to recover once the Leafs went up 3-2 on van Riemsdyk’s second goal of the game.

Here are a few key stats, thoughts and observations from the loss in case you missed it.

It is becoming pretty clear that Eric Tangradi doesn’t fit into the top six. I know that many people would love to see this experiment continue for a while longer, but a shortened season is no time for experimentation. Especially when it could eventually stunt the productivity of what is arguably the top line. Tangradi hasn’t necessarily hurt the team while playing in the role prior to this evening, but he wasn’t helping either. Stir in an egregious turnover like the one this evening and the trust of the coaching staff begins to vanish. Once that is gone he is going to have a tough time cracking the line-up, let alone skating with Malkin and Neal. Tangradi has produced two shots on goal during his three games this season and the only thing that is probably keeping him on the team is the fact that he would have to clear waivers to be sent to Wilkes-Barre/Scranton. My opinion may not necessarily be a popular one, but those who follow know that I will own it. I am still hoping he’ll one day prove me wrong.

Sidney Crosby notched his first goal of the season. He looked very comfortable in scoring it off of what amounted to a breakaway. He had shown a little bit of rust to this point in the season, hopefully the goal is the WD40 he needed to get his game lubricated.

Crosby and Pascal Dupuis were the only Penguins to register a positive plus-minus rating. The rest of he team registered a collective minus-17.

It is worth noting that even though the team allowed five goals, Paul Martin and Brooks Orpik were even. Martin, who has been playing some inspired hockey, skated 24:49, while Orpik skated 23:48. Overall the duo has been a very effective shutdown tandem.

The Penguins have scored the first goal in all three of their games this season. They have also tallied a power-play goal in each contest.

James Neal fired five more shots on net and now leads the league with 19. Zach Parise of the Minnesota Wild is second with 17. Neal also blocked three shots in the game.

Deryk Engelland and Colton Orr renewed their rivalry by throwing down for a third time this evening. The fight was brutal and saw the combatants exchanging blows for 65-seconds. Leafs’ head coach Randy Carlyle had the best descriptor for the event.

“I guess there is somewhat of a relationship between the two individuals that’s previously transpired,” Leaf’s head coach Randy Carlyle said. “Anybody that says that they don’t like to watch fighting in hockey, that was one that you could sit down and have one probably two drinks because it was so long.”

The penalty kill has been a very bright spot for the Penguins. After killing 7-of-8 Leafs’ power plays this evening their PK is now 13-for-13 in 5-on-4 situations, with the lone goals coming during two 5-on-3 opportunities this season.

The team is now 23-13-9 in home openers. This was the third me in their history that they have met the Toronto Maple Leafs in such games and they are now 0-3.

Chris Kunitz was recently named to the Central Collegiate Hockey Association’s All-Decade team. Kunitz, who played at Ferris State University, was one of 12 former CCHA players named to this prestigious group.

Though a loss always stings in the home opener, the team will have a have a few days to work on areas of concern before leaving for a two-game road trip that will take them through Winnipeg and Ottawa this weekend. The Birds are back home at the CONSOL Energy Center on Tuesday evening against the Islanders.