The Penguins aren’t strangers when it comes to dealing with the situation that they face tonight in Montreal.

The Penguins aren’t strangers when it comes to dealing with the situation that they face tonight in Montreal. In fact, it seems that they are most comfortable when they are entering a hostile environment with the chance to close out a series. They have actually closed out five consecutive series on the road, including two in Game 7s last year.

Dan Bylsma addressed the environment in Montreal before he and team caught their charter yesterday afternoon.

“I can certainly say that Game 4 was probably the loudest I think I have ever heard it, but I probably thought that about three other times last year as well,” Penguins head coach Dan Bylsma said Sunday before he and his team left for Montreal. “That is a unique and crazy environment. The loudness of the building, especially going off after Game 4 – I liked the sound of the building going off after Game 3 a whole lot more than Game 4 I know that. That was loud.”

The two teams hit the Bell Centre ice for their morning skates a few hours ago and the sessions definitely offered some intrigue. Especially the Canadiens’…

Most of the injured Canadiens’ defensemen at least attempted to skate today, be it prior to, during or after the session.

Andrei Markov took the ice for the first time in full gear since he sustained a knee injury during Game 1 of this series. He was joined by Paul Mara before the full team hit the ice. Though it is a “win or go home” situation, Jacques Martin has already ruled Markov out of tonight’s game.

Jaroslav Spacek also took the ice, but did so with the team. He is expected to be in the line-up for the first time during this series and should be a big boost. Spacek was great against the Capitals when he was able to play in that series. 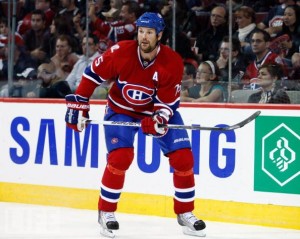 The Canadiens did manage to sneak Hal Gill on to the ice following their full skate this morning, as if it is possible to sneak that mighty mite in anywhere.

Gill’s status from this evening is unknown, but if he were unable to go it would certainly be a huge advantage for the Penguins.

The Canadiens put a gag order on Gill, but he did tell the gathered media that his ailment was only a cut.

Dan Bylsma and the Penguins are expecting him to be in the line-up when they take the ice this evening and it wouldn’t be all that surprising.

“We anticipated Hal Gill playing tonight prior to his ice time,” Bylsma told said in his post skate comments. “We expect him tonight.”

Max Talbot was also pretty confident about the fact that they would see Gill this evening.

“It is playoff time so you cannot count him out,” Talbot told Penguins.com. “I played with him last year and he is a warrior. You never know if he is going to play or not.”

Martin has said that Gill will officially be listed as a game time decision.

It looks as if Ruslan Fedotenko and Alexei Ponikarovsky will again be held out of the line-up for the Penguins, as the following line combos were used this morning.

You can read my full preview for tonight’s game over at Versus.com… here is the link.