The Penguins get back on the winning track thanks to big efforts from Malkin, Crosby and their Penalty Killers… 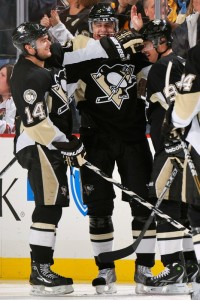 If the Penguins were hoping to use tonight’s game to bounce back from two tough losses against a couple of hated division foes last week, they couldn’t have scripted the evening any better than it played out. Evgeni Malkin tied a career high with five points on the evening, Sidney Crosby chipped in three of his own, and Marc Andre Fleury came within a puck that deflected off if his head and in from notching his second shut out of the season.”

However, Malkin was the story of the evening as he looked a lot more like the guy who won the Art Ross and Conn Smythe trophies two seasons ago, than the guy who has been skating for the Penguins to this point on the season. He looked healthy, comfortable and hungry for more as he took over the game during the second period.

“Yeah, I am happy cause I am scoring and the team win, I feel awesome now and every game I feel better and better and on my game,” said Evgeni Malkin following his dominating performance.

He also seemed pretty excited about the fact that the knee injury that had been plaguing him throughout the year is feeling a lot better.

The Penguins took a 1-0 lead at the 6:56 mark of the first period on a Kris Letang slap shot during their first power play, but the really took control of the game at the 19:25 mark of the period. That is when Crosby and Malkin decided that it was going to be show time and came together for the first of three co-op’d goals.

Crosby won an offensive zone face-off by pushing it forward to himself, Malkin immediately went to the net and Crosby found him for a one timer that he buried into the corner over Jason Labarbera. Then the dynamic duo came together for another goal just :51 seconds into the second period. This again came at the expense of Keith Yandle, who was victimized on the first, as he fell behind his own net while trying to clear the puck. Crosby gathered it in and found Malkin streaking down the slot for a goal that was close to a mirror image of his first.

Just 2:49 later, it was Malkin’s turn to play playmaker, as he set Crosby up for a nice wrist shot from the high slot. The Birds were sitting pretty at 4-0, but they weren’t done yet. They got goals from Matt Cooke and Chris Conner before all was said and done.

The Coyotes never really challenged the Penguins, but did find a way to get on the scoresheet. Unfortunately it came on a wacky bounce off of the shoulder of forward Woytek Wolski who was camped out to the right of Fleury. The puck was shot to the net by Derek Morris and Wolski tried to get his twig on it, it deflected off of his right shoulder and across the goal mouth. It struck Marc Andre Fleury in the head and deflected in behind him. Though it was a fluke, Fleury jokingly showed his exasperation following the game.

That moment aside, he was all smiles as he complimented his teammates for another great game in front of him. He was especially complimentary of his penalty killers, who were at the very best in holding the Yotes off the board in eight attempts. They were especially dominant during a second period five-on-three.

The good news about tonight’s return to the team’s winning ways was that the HBO cameras captured it all, thus keeping the birds feel good vibe alive for episode two of their 24/7 series.

The Penguins will be back on ice here at the CONSOL Energy Center against the Florida Panthers Wednesday night… the same Panthers who just finished off a 5-0 shut out of the same Flyers that beat the Penguins last week.

Taylor Pyatt picked the wrong moment in time to drop the gloves. A scrappy five man pile up during the early moments of the third period left him looking to square off with someone. Unfortunately for him the guy he chose was Deryk Engelland, who knocked him out of the game with a huge right hand. I would be very surprised if he doesn’t have some kind of facial fracture… or at the very least a concussion.

Keith Yandle had one of the worst games that I can recall seeing him play. He was victimized for three Penguins goals between the end of the first period and throughout the second, including the play in which he fell behind his own net leaving Jason Labarbera hung out to dry with Crosby and Malkin on what amounted to a two-on-none.

Chris Conner was finally rewarded for his feisty play and big time work ethic as he collected a pass last in the game and went in on a breakaway. He quickly took the shot catching AHL call up Matt Climie off guard and scoring the goal.

Kris Letang has another big night and he chipped in two points to bring his, Malkin’s and Crosby’s game totals to nine on the evening.

Malkin and Crosby combined for 15 shots on goal in the game — The Coyotes as a team had 27.

There was no post game chatter about Matt Cooke’s roughing (announced as charging) call… some internet speculation suggests that the play could be reviewed by the league. It could be the case, though there was no indication post game.

Dave Tippett on his team’s performance… 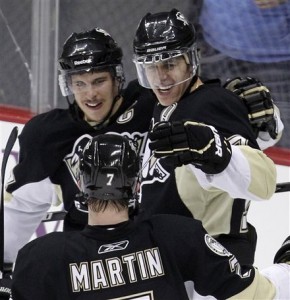 Dan Bylsma on his team’s penalty killing … especially against the two-man-advantage during the second period:

“You don’t want to see your team get in that situation, five-on-three. Our killers did an outstanding job. we had blocked shots from numerous guys. Marc Andre Fleury was great in there. Our penalty killers did a great job. I also thought that at that point in the game, it raised our intensity level and it raised our focus. It was a great job killing them off, and I think we were able to keep that focus and still play our team game in the third period — even when the score was 5-0.”

“That’s odd to see from Sidney Crosby. (in regard to Crosby’s comments about shaking his head a couple times while watching Malkin tonight) I’m not surprised he said it after the game, but even during the game you could see a shift where Evgeni Malkin took a shift in the second period, got a pass from Chris Conner and missed the puck. When it got back again, and had a chance on a spin by the right of the net — the game was going to a different level for him. For Sidney Crosby to shake his head a little bit and say ‘wow’ is a unique thing.”

On Malkin’s health and progression:

“I think he came back and had a few games, but tonight he was real focused on playing the right way and playing the way we play. He got results as a result of that. The face-off goal from Sidney Crosby, the power play — he obviously had a jump in his step, and carried that momentum. He could have had a couple more tonight, a couple more points for sure; maybe a goal or two; an assist. He had that many chances. It’s good to see him skating like that.”