How this silliness has even grown legs I will never know. The funnier thing is that the fact that the Penguins aren’t considering trading Malkin has become a headline! Thanks for that note from the desk of the obvious! 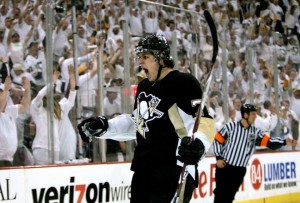 Wow, what a Monday morning… it is absolutely mind blowing how every conceivable annoyance can find its way into a few hour span that will most likely define my entire week. I won’t bore you with the details of what has been running wild this morning, but I will share this… the Evgeni Malkin trade speculation is an unnecessary addition to the annoyance that has me reaching for my ball peen hammer today.

How this silliness has even grown legs I will never know. The funnier thing is that the fact that the Penguins aren’t considering trading Malkin has become a headline! Thanks for that note from the desk of the obvious!

When it comes to figuring out who we can pin this madness on, we should look no further than John Grigg.

Grigg is the Hockey News writer that initially speculated that the move would be a prudent one for the Penguins to explore this offseason. He looked at a team that was knocked off in the second round of the Eastern Conference playoffs and decided that they just wouldn’t be able to maintain a competitive balance if they continued to roll with their three center model.

Grigg argued that the Penguins are nothing without their three big centers Sidney Crosby, Evgeni Malkin and Jordan Staal…

“That Habs’ plan worked to the nth degree and exposed the Pens’ ugly underbelly,” Grigg said in his 5/13/2010 piece for THN.com. “Take away those three guys and there’s basically nothing left up front to scare anyone.”

I think anyone who watches the Penguins on a regular basis would tend to agree that those three big boys are the straw that stirs the Penguins’ proverbial drink…especially when the wings vastly underachieve as they did this season.

However, one second round exit on the heels of two Stanley Cup appearances and an Olympic tournament is no time to make knee jerk reactions. Especially concerning a talented manster like Evgeni Malkin who is less than one year removed from an Art Ross Trophy, Hart Candidacy and a Conn Smythe Trophy win.

Sure, the talented Russian did not come close to playing up to expectations this season, but he is not the type of talent that you give up on after one disappointing season.

What is lost in the whole Grigg article is the fact that the man is not stating a RUMOR… he is looking at a situation with a hockey eye and trying to come up with a plan to get the Penguins some much needed help on the wing. He looked for a team that would consider trading for a player like Malkin and came up with a hockey trade with the Edmonton Oilers that could be intriguing. No basis in fact… no basis in anything other than recesses of his mind.

I completely understood where he was coming from and it made for an interesting read…aside from the fact that he has an aging, overpaid and injury prone Sheldon Souray coming back to the Penguins in his “you be the GM” scenario. It created some water cooler talk and that was all…

Until the local feces stirrers started…

Both of the major newspapers in the city and all of the talk radio shows went “trade Malkin” crazy over the last week and half. Something that has no basis in fact inundated us all! I started getting multiple emails a day asking for an opinion on something that has ZERO chance of happening this year.

I have long explained that the Penguins aren’t going to entertain deals that include players that they consider to be core components of their franchise, at least not right now. They don’t have too! Yes… they need to find a way to get more production from the wing position, but they aren’t going to do it at the expense of one of the most talented players in the league. At least not right now.

It could also be argued that when Malkin plays like Malkin, something he didn’t often do this year, he offsets the need for a 30+ goal winger. It was an abnormally slow production year for the Magnitogorsk native, which can be traced to fatigue in my opinion.

Malkin and the rest of the Penguins played close to 300 hockey games over the past three seasons. That equates to more hockey than any of these youngsters have ever played over that time period in their careers. I say cut them a break…

Have GMs called to discuss Evgeni Malkin with Ray Shero? I would say yes…they would be foolish not too… opposing GMs aren’t doing their jobs if they aren’t asking about the availability of guys like Malkin and Staal. However, Shero is an extremely patient man, one that doesn’t make a move without careful calculation and consideration.  He would take any call, but isn’t going to act on something like moving a core player until he absolutely has too. That day is not upon us…

Will it happen at some point in time? Sure, I could see Shero having to consider some very tough decisions before it is all said and done, but that is several years down the line. If you need to draw comparisons, I think it is fairly obvious that Sidney Crosby is playing Mario Lemieux to Evgeni Malkin’s Jaromir Jagr… we already lived this moment…but it is only the early 90’s for this incarnation, not the early 2000’s if you catch my drift.

The bottom line is that you shouldn’t worry about the team making an ill advised trade for Evgeni Malkin any time soon… Shero has a core of stud players that are all in their early twenties and he is going to live and die with them for at least the next few seasons…doing otherwise would be foolish.

Here are a couple of respected opinions to back me up…

There have been rumblings in cyberspace about the Penguins possibly trading Evgeni Malkin in the offseason. There is zero chance of that happening. The real story in Pittsburgh is what the Pens will do with unrestricted free agent-to-be Sergei Gonchar. The Pens want him back, but his age (36) is a factor because of the CBA stipulation that states contracts for players 35 and older count against the salary cap regardless of whether those players retire, etc. So, the Penguins have no interest in doing a deal with any term to it.

Hey Adam, I was wondering: If the Pens trade Evgeni Malkin, where would he most likely be going and for whom? Also do you see the Oilers in playoff contention next year?
Michael Debinski, Edmonton

Not to burst your bubble, but if Penguins GM Ray Shero dealt one of his top two stars in a season when that star (a) played in the Olympics, and (b) had two appearances in the Cup final in the previous two seasons, he should be removed from his position.

In all honesty, I’d expect Jordan Staal to be traded before Malkin. Stranger things have happened, but teams don’t just waive the white flag on prodigious talent – especially when a team’s goaltender is more to blame for an early playoff exit.