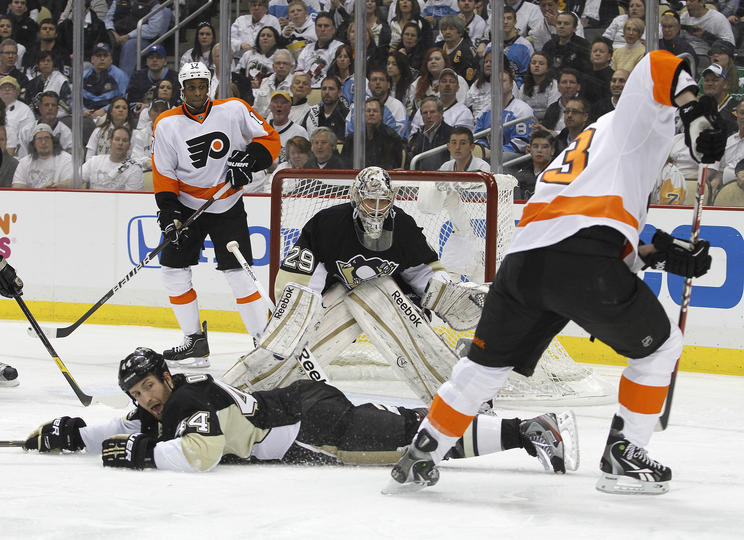 The Penguins first round series with the Philadelphia Flyers is not yet over, though it certainly seems like it might be. After all the birds put together two of their worst games of the season on home ice against a team that was chomping at the bit to beat them in a post season series for the first time since the year 2000.

The offense has done its part, as the team cashed in eight times in the two games, a total that should have been more than enough to secure at least one and probably two victories. Unfortunately the Penguins have been defenseless against a Flyers attack that has had them running around their own zone like lost children.

If Dan Bylsma wants his team to have any chance whatsoever of digging out of the 2-0 hole that they are in he had better come up with some plan to cover the “third man” that always seems to be open when the Flyers are on the attack.

The Flyers are forwards are utilizing some outstanding play beneath the Penguins goal line to expose a defensive unit that was deemed “good enough to make a run at another Stanley Cup” at the League’s trade deadline.

Paul Martin, Brooks Orpik, and Zbynek Michalek are playing far below expectations and it is hanging Marc Andre Fleury out to dry. Mix in the fact that Matt Niskanen is on the shelf and Ben Lovejoy made a handful of gaffes that led directly to goals and you have a recipe for disaster.

The bad thing about this entire situation is that the Penguins likely would have matched up well with just about any other opponent who is playing in the Eastern Conference playoffs. Sure there would have been some headaches, but they would have been ok… with the Flyers the headaches were obvious all season long. They never really had answers against this new look group that is full of heart and soul and a group of players who are starved for success.

This group of Flyers is akin to Jason Vorhees or Michael Myers in that they are never dead. You go up 2-0 on them; they spring up just as you go over to tap them with your foot to ensure that you finished the job. In the sequel you go up 3-0, grab your friend and run for it, they pop out of the woods on the path in front of you.

Their immortality combined with the fact that the Penguins’ defense has more holes than a nice Swiss cheese is a huge reason why they are running away with this first round match-up.

The bottom line is that these aren’t the Flyers of two or three years ago. They traded their captain and their leading goal scorer and grafted on heart, soul and young talent that is ready for prime time. If they have one liability, it may be one that has long plagued them – their goaltender.

Ilya Bryzgalov looks like a guy who is ready to go into full meltdown mode, but his team has ensured that he hasn’t had to be perfect or anywhere near it.  If they find themselves in a low scoring game, they may run into some problems, but as long as they are free-wheeling it and scoring at will they will be just fine.

Max Talbot was a beloved playoff hero, full of heart, soul and a never say die attitude. He always seemed to score a meaningful goal, provide a big moment such as the “Shhh” against same Flyers who he is currently a part of and scored two of the biggest goals in Penguins history in helping them clinch their third Stanley Cup against the Detroit Red Wings back in 2009. Then he and the team agreed to part ways.

Most people were ok with the decision based on the fact that it was an amicable parting, one in which the player wasn’t offered a contract and needed to move on. He was even fawned upon in the form of a video tribute when he first returned to the CONSOL Energy Center as part of the opposition. Then came Game 2, where he slid a dagger straight into the hearts of Penguins fans by notching a shorthanded goal and assisting on a second one. He has also been invaluable in helping to neutralize the league’s leading scorer, Evgeni Malkin, even punching him to the ice late in the game on Friday night. 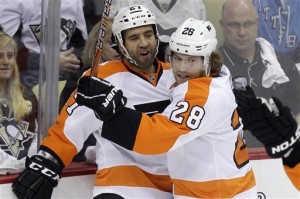 I don’t spite him for it, as he is just doing what he does, albeit in Black and Orange, but Talbot has officially crossed over to the other side.

Heck, a case can be made that losing guys like Talbot and Mike Rupp, who is currently adding a level of heart and soul to the rival New York Rangers, is a big reason why the Penguins have looked like stumblebums during their first two games.

The only person that is feeling worse than the Penguins at this point in time is Columbus Blue Jackets general manager Scott Howson. Howson famously traded the 7th overall draft pick in last year’s entry draft, along with Jakub Voracek to the Flyers for Jeff Carter. Carter had no desire to play in Columbus and currently skating for the Kings in a first round playoff series.

Voracek had himself a pretty nice season, highlighted by the game winning goal that he scored against the Penguins in overtime during Game 1. The 7th round pick has been pretty damn good as well, as the Flyers used it to select Sean Couturier, who has been one of the Flyers best players to this point in the series. Not only did he notch three goals and one assist during the Flyers Game 2 victory over the Pens, but he has been playing some outstanding defense.

He youngster has been matched against the Penguins Evgeni Malkin all series long and has essentially shut him down – something that many have been unable to do this season. He has been great in the face-off circle winning 63 percent of his draws during Game 2 and has played well beyond his years.

Dan Bylsma didn’t do a very good job of getting Malkin away from him on home ice and that task is only going to get harder on the road.

The Penguins and Flyers drop the puck on Game 3 at 3:00pm in Philadelphia… stay tuned for more later…