Dan Scifo takes a look at Marc-Andre Fleury, his troubles, triumphs and how history tells us that he will be just fine. 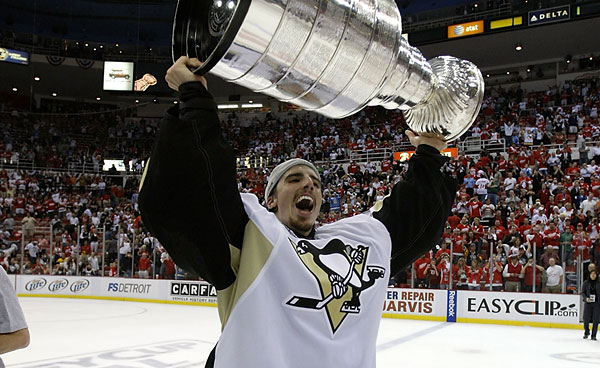 By Dan Scifo
From the Point contributing writer

Let’s take a trip down memory lane shall we?

The Pittsburgh Penguins hold a 2-1 lead over the Detroit Red Wings in Game 7 of the Stanley Cup Finals with six seconds remaining in the third period.

Following a faceoff win in the offensive zone, Detroit defenseman Brian Rafalski’s shot from the point was blocked, but the always-dangerous Henrik Zetterberg picked up the loose puck and desperately fired it at Penguins’ goaltender Marc-Andre Fleury, who responded with a right pad save.

However, he kicked the rebound to a wide open Nicklas Lidstrom at the point. With time winding down, Fleury, who was out of position, lunged across the crease to turn Lidstrom’s shot aside with one second left.

“The rebound was wide and I saw Lidstrom coming in and I just wanted to get my body out there,” Fleury said after the game. “It hit me in the ribs so it turned out good.”

Boy did it ever. That save, the defining stop of his career, allowed the Penguins to hoist the Stanley Cup for the first time since 1992.

Since then, things haven’t been as smooth for Fleury.

Fans have been relentless on Fleury. Some criticisms warranted, some of them outlandish. 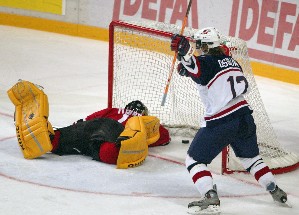 But he’s faced – and overcome – heavy criticism in the past. Prior to his Stanley Cup clinching save, Fleury was known as the goaltender who couldn’t win the big game.

Fleury’s late clearing attempt, while playing for Team Canada in the 2004 World Junior Championships, bounced off his own defenseman and into the net for the game-winning goal.

During Fleury’s first Stanley Cup Finals appearance, he tripped and fell flat on his face as he came out of the runway at the Joe Louis Arena. The Penguins went on to drop both games in Detroit, en route to a 4-2 series loss to the Red Wings.

Six days before the Penguins captured the Stanley Cup, Fleury was yanked from Game 5 after allowing five goals on 21 shots during a humiliating 5-0 defeat at the Joe Louis Arena.

But he had the mental toughness to quickly bounce back three nights later in Game 6, stopping 25 shots and forcing a deciding Game 7 after a 2-1 victory. Though he made crucial saves on Zetterberg and helped the Penguins kill two power plays in the final 10 minutes, Fleury’s biggest stop came with 90 seconds left and the game in the balance when he denied Daniel Cleary on a breakaway.

Fleury saved his best performance, however, for Game 7 at the Joe Louis Arena – a place that haunted the Penguins’ goaltender throughout his career. The arena’s active, problematic end boards helped contribute to a 3.64 goals-against-average and a .887 save percentage heading into Game 7.

But for one night, Fleury exorcised his demons and silenced his critics.

Those critics have returned, however, following last year’s playoff disaster against Montreal and a disappointing start to the season.

Fleury, who started the season 0-3 with a 3.41 goals-against average and a .853 save percentage, took the first step toward putting a poor start behind him as he helped the Penguins win their fourth straight overall and end a six-game losing streak Thursday night in Nashville.

It might only be one win, but it’s an important one – and a key first step – toward, once again, having to silence his critics.

He allowed a goal on his first shot, 53 seconds into the game, but rebounded to make 21 saves for his first win of the season.

Bouncing back has been a key theme for the Penguins’ franchise goaltender throughout his career.

Fleury has overcome his detractors in the past.

He will, most definitely, bounce back again.