Amber Alexander takes a look at the criticism that has been leveled at Dan Bylsma by fans in recent days. 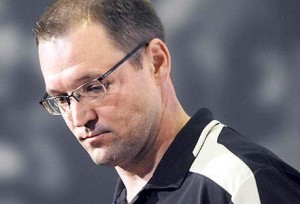 It will be exactly 1 year and 8 months since Dan Bylsma was hired as the interim head coach of the Pittsburgh Penguins.

In that short amount of time, Bylsma has reached a “rock-star” status with players, management and fans in Pittsburgh and all over the world.

As fans we were on cloud nine, knowing that he had signed an extension to be coach of our beloved team for the next however many years.

It’s crazy how things can change so quickly.

Last season was a frustrating season because of the inconsistency the team had; winning one game, losing the next.

It was a word that we as fans hated.

But still, fans never turned on the coach, never blamed him for the inconsistency.

This season is different.

We are 15 games in with a 7-7-1 record and fans are already calling for coach to be fired.

For those of us who were Pen fans when they were in the gutter in the ’05 season and the slump in the ’08-’09 season, we can all share a laugh at this.

The loss to Dallas set off a fire storm with the Penguin fan base that is shocking.

Everywhere you looked, they were taking bets on how many more “months” coach had left.

I was fortunate enough to have a question that I submitted about the topic to Penguins radio answered by that morning’s guest, Phil Bourque.

His response was straight to the point.

“Anyone who thinks that Dan Bylsma is going to be gone is out of their mind,” Bourque said.

He then went on to talk about the flack that Coach is getting and how hockey players use that as motivation.

I’m glad to see someone of Bourque’s caliber be blunt about the problems a team can face with its’ fan base.

It adds to the list of “How You Know You’re A True Fan.”

It didn’t help with the controversial article posted by Rob Rossi, which I actually enjoyed because it’s nice to see Sid become more of a leader day by day.

Rossi’s article and Crosby’s words were taken out of context. But at the same time, it’s still a controversial topic.

Sid made it clear that in order for Marc Andre Fleury to get his confidence back, he needs to play.

Coach made it clear that he has given Flower his chances and will continue to give him his chances but that he is going to ride the hot hand.

One thing that I have said about Bylsma is that he believes in his players, throwing Mark Letestu out as the third shooter in the shootout was outstanding.

He is definitely a player’s coach in that he has the calm demeanor to show that he is going to put his team down when they are losing.

At the same time, when a player, or goalie, isn’t playing up to par, he isn’t going to dodge the question in an interview.

We are seeing a new side to coach that I think is still maturing but by game 41, it will be full blown.

Fans initially thought it was a horrible idea.

Wonder what they are thinking now?