Penguins new forward Steve Sullivan excited for the opportunity to join the club. 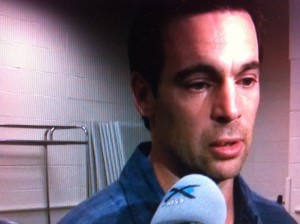 The Penguins might not have been able to close a deal with Jaromir Jagr, but in watching him sign with the Philadelphia Flyers the door opened to bring in what may be a better overall fit for the organization.

Steve Sullivan, late of the Nashville Predators, signed with the Penguins during the afternoon hours of July 1st and he couldn’t be more excited about the opportunity. Though he has been in the league for fourteen seasons, he has not been able to hoist a Stanley Cup and he believes that the Penguins give him an excellent opportunity to just that.

“Look at the talent from top to bottom, the way their built,” Sullivan said during his first media availability in Pittsburgh on Thursday afternoon.  “It’s got longevity to be a winner for a long time.

“I don’t know how much time I had left so for myself this time around it was all about winning. It was about the chance to win a Stanley Cup. My number one choice was here and thankfully we got the phone call.”

It shouldn’t be a huge surprise to see Ray Shero bring in a guy like Steve Sullivan.  He has been a very productive forward over his career scoring 682-points (266G-416A) in 890 career games, 192 of which came on the power play, which is an area that the team really believe he will be able to help them.

Sullivan has been very effective with the extra man and is capable of quarterbacking the power play. He has also shown an ability to play down low near the goal line and had some great success playing in that area on a Predators team with Paul Kariya a few years back. The Penguins will likely look for him to play on the left side, thus utilizing his right handed shot for one-timers.

“I think that they enjoy the fact that I am a right handed shot,” said Sullivan. “I’ve been able to quarterback the power play in Nashville for the last few years.

“Just the intangibles that they were missing that they thought were needed to improve this hockey team and things that I could possibly do, so they’re very excited about the possibilities.”

Sullivan is also a Ray Shero guy and the two have a great relationship that goes back to the Penguins’ general manager’s days with the Predators. Shero was the guy negotiated a number of contracts for the team and worked on several deals with Sullivan in the past.

That personal and working relationship made the signing even easier for Sullivan.

“Without a doubt, my relationship with Ray [made it easier] — we’ve had to negotiate two or three contracts in Nashville and he was the main man there for doing so,” said Sullivan.

The forward, who will likely wear number 26 in Pittsburgh, was excited to receive the call on July 1st, especially when he wasn’t exactly counting on working out a deal so quickly with anyone. Once the call came, he and his family decided that it was a good fit and acted swiftly to get the deal signed.

If reuniting with an old hombre wasn’t enough for Sullivan, the chance to play with the Penguins all-world centers really clinched the decision for him. He wasn’t shy about correcting one of the many gathered media members when he was asked to choose between Sidney Crosby and Evgeni Malkin as the guy he would like to get a chance to play with.

“You can add Jordan Staal to that list too… and that’s great… thank you very much,” Sullivan said while laughing. “If I could play with anyone of those three, I win. I’m just looking forward to it. I’ve never seen a cast of centermen like there is here. So I don’t think it matters where I play: right wing, left wing, anywhere with those three players I think is a good situation.”

Though Sullivan has had his share of injuries over the past few seasons, he has declared himself healthy. His back that has been through surgeries has felt great since he got back on the ice following the second surgery and he has had no linger effects from the knee injury and sports hernia that plagued him last season. 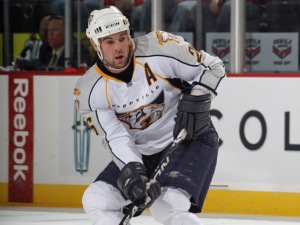 Sullivan seems like a newer version of Bill Guerin or Petr Sykora, at least in how valuable he may end up being the locker room. He is comfortable being one of the boys, would step into a leadership role if need be; though he didn’t feel that would be necessary on a team that features Sidney Crosby.

“I think you look at the leadership in there, look at Sidney Crosby and how he plays, I think everyone wants to follow him and his work ethic and how he prepares for the game. As an outsider looking in, it looks outstanding.”

He is more than comfortable playing a complimentary role until he figures out the characters and the dynamics within the room as it is today. So far Sullivan seems like the perfect fit to fill the “veteran” role on this season’s team, joining the likes of Gary Roberts and the aforementioned Guerin and Sykora.

“I don’t think that it hurts to have a veteran in there with experience in the league who’s been through the grind,” Sullivan said. “I think that will help.”

He has been impressed with everything he has seen thus far, the Consol Energy Center, the city, and the system that he will soon be playing with his new teammates. Baring an unforeseen setback, this signing has the potential to be a very successful one for Shero and his new forward.