It seems that injured center Jordan Staal took the ice with his teammates for the first time since having a tendon in his foot lacerated on Friday night. 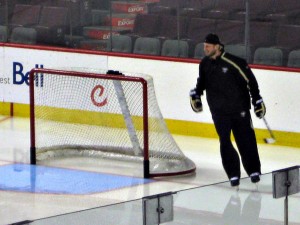 Sam Kasan just updated the Penguins official site from the Penguins morning skate at the Bell Centre in Montreal and he provided some amazing news. It seems that injured center Jordan Staal took the ice with his teammates for the first time since having a tendon in his foot lacerated on Friday night.

Staal was in a warm-up suit and only skated for about five minutes, but it is still amazing news considering the nature of his injury. Here is the blurb from Kasan’s game day blog.

11:51 AM:
Penguins center Jordan Staal, who was missed his first career game due to injury in Game 2 after having a procedure to repair a lacerated tendon in his foot, skated briefly prior to the team’s morning skate. Staal skated on the ice for about five minutes, an amazing idea considering the nature of his injury.

Definitely great news for the Penguins.

Max Talbot did an admirable job of filling in for Staal on Sunday afternoon, but it is hard for anyone to replace the size, strength and wingspan of Staal. The man is a huge physical specimen.