Would the Winter Classic have ever come to Pittsburgh without the likes of Mario Lemieux and Sidney Crosby? Dan Scifo says no…

(Ed’s Note: Though Dan Scifo is typically a contributor on Fridays here at FTP, he went above and beyond the call of duty during this weekend’s Winter Classic events. Here is another story that he did discussing the fact that the Winter Classic would likely have never happened in Pittsburgh if not for Mario Lemieux and Sidney Crosby. This story runs here as it appeared in the Latrobe Bulletin.)

PITTSBURGH — Ten years ago — even five years ago — the idea of a marquee event like the National Hockey League’s Winter Classic at Heinz Field in Pittsburgh appeared inconceivable.

But Mario Lemieux and Sidney Crosby changed everything.

Forget about the Penguins’ poor performance during a 3-1 loss to the Washington Capitals. Saturday night’s Winter Classic at Heinz Field was a night reserved for celebrating hockey in the city of Pittsburgh.

“Anytime you can host a Winter Classic in your city, it’s very special,” Lemieux said. “It’s exciting for the franchise, the players and, of course, the fans supporting us throughout my career since I’ve been here.

“We struggled for many years before the lockout. We didn’t compete at the level we wanted to, but the new (collective bargaining agreement) helped us put a great product on the ice and compete.”

Lemieux saved the Penguins on more than one occasion, once as a player, bringing two straight Stanley Cups in the early 1990s, again, when he rescued the team out of bankruptcy in the late 1990s, and a third time when he kept the franchise in Pittsburgh with the construction of the Consol Energy Center.

“The thing I like about Lemieux is that not only is he a great hockey player, but he stuck with Pittsburgh,” former teammate and NHL Hall-of-Fame defenseman Paul Coffey said. “At the end of his career, he could’ve went to New York or Montreal and made $10 or $15 million a year.

“He could’ve bailed out when the team was in trouble, but he believed in Pittsburgh.” 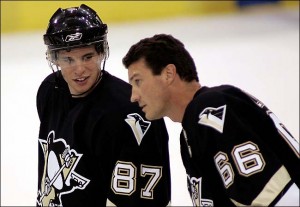 Luck also went the Penguins’ way when the franchise, after multiple seasons at the bottom of the NHL standings, won the right to draft Crosby — considered at the time “The Next One,” in reference to Wayne Gretzky’s “The Great One” moniker.

Crosby went without a point Saturday night for the second straight game, but the Pens’ captain is coming off a dominant 25-game scoring streak, the longest in the NHL since 1992, and is considered by many — including Lemieux — as the best player in the world.

“What he is doing now is much more impressive than what I did years ago,” Lemieux said. “I think it’s much tougher now, the way the league is set up, and for him to do the things he does every night is incredible.”

The Winter Classic spectacle itself was an incredible feat, pitting the sport’s two best players and biggest rivals — Crosby and Washington’s Alexander Ovechkin — against each other in a prime-time, under-the-lights setting.

“Somebody was telling me, as they approached the stadium, and they saw the lights on, it was just a spectacular sight,” NHL commissioner Gary Bettman said. “They got chills down their spine and it was one of the more amazing things they’ve been associated with in their time in hockey.”

Rain couldn’t dampen this event, which was originally scheduled for 1 p.m. before it was moved to an 8 p.m. faceoff because of weather-related concerns.

Rain started coming down in the second period and reached its heaviest point early in the third.

Bettman was in constant communication with league officials as they monitored conditions throughout the game.

“It was the same conditions for both teams,” Bettman said. “We were in communication with officials from both teams at each stoppage and nobody was complaining about it.”

Despite the rain, nobody was complaining about the Winter Classic or the move under the prime-time lights, either. Bettman said the ratings and discussion with network partners will determine the time slot for future Winter Classics.

Either way, this one was considered a smashing success.

“People outside in the street fair were telling me that this was like the Super Bowl,” Bettman said. “When you can get this kind of a response to a regular season game it’s truly something special and truly something unique.”

***In addition to his work here at FTP, Dan Scifo is also the Assistant Sports Editor for the Latrobe Bulletin.