Dan Scifo comes through with a one-two punch, as he gives us a great recap of the Alumni Game… 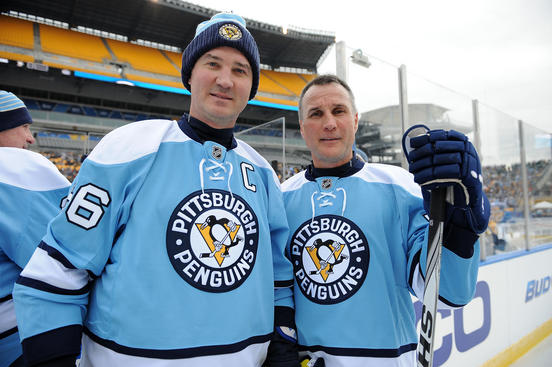 PITTSBURGH — Old-time hockey was on display Friday morning at Heinz Field in Pittsburgh as Mario Lemieux returned to the ice to lead a group of Penguins’ alumni to a 5-5 tie against Washington Capitals’ greats.

Lemieux recorded two assists, including the secondary helper on a power-play goal that brought back memories of a dominant special teams unit in the early 1990s.

“It looked like we knew what we were doing,” Lemieux said with a grin. “It was pretty much the same setup we had 20 years ago.”

Three players enshrined in the Hall of Fame figured in on the goal, scored with 5:40 remaining in the second and final period.

Lemieux, much like he did throughout his illustrious career, methodically weaved his way into the zone, moving past one defender at the blue line and stick-handling around another in the corner before sending a pass to defenseman Murphy, who ripped a shot from the point. Francis, who helped bring the franchise its first Stanley Cup after he was acquired in a key 1991 trade, directed the shot in the back of the net, giving the Penguins’ alumni a 5-4 lead. Murphy nearly tallied another one from Lemieux late in the third, but the goal was disallowed because of goaltender interference.

Peter Bondra, known throughout the 1990s as a dominant scoring force in the NHL, was the Capitals’ alumni extra attacker with less than a minute left when he ripped a slap shot past Penguins’ goaltender Frank Pietrangelo – best remembered for “The Save” in 1991 –  to tie the game at 5.

The final minute went scoreless and despite pleas from the 10,000-plus fans in attendance at Heinz Field, the alumni game ended in a tie – much like games did before the NHL went to a shootout format after the lockout.

Lemieux arrived in the interview area following the game, winded and seemingly relieved the game had ended. Others shared the same sentiment.

Still, the opportunity to skate one more time and spend time with old teammates was more than enough to make the experience a memorable one.

“It was fun to be a part of it, to play here outdoors,” Lemieux said. “Just to see some old faces again, some guys I hadn’t seen in a long time and bring back some guys from the (Stanley) Cup years and older guys was pretty special.

“These are memories we can cherish for a long time.”

Friday’s alumni game was a trip back in time, hearkening the days of fierce early-to-mid 1990s playoff battles between the Pittsburgh Penguins and the Washington Capitals.

The first period featured a combined six goals between the two teams and similar to the wide open play that dominated that era. The second and final period didn’t feature as much scoring, similar to the 1996 four-overtime classic between the Penguins and Capitals during the Stanley Cup playoffs.

He didn’t score on his first shift in this return, but Lemieux still figured in on the opening goal, reuniting with an old linemate he set up so many times throughout his career. Lemieux, along the right boards, sent a cross-ice pass to Rob Brown, who one-timed a shot behind Don Beaupre.

Coffey, known for his end-to-end rushes, didn’t look like he lost a step as his blazing speed was on display several times, most notably during a rush late in the first period.

The Capitals were welcomed to Heinz Field by a chorus of boos, while the Penguins’ alumni walked together down a lengthy runway to the ice with the old Pittsburgh Penguins’ “Boys of Winter” theme playing overhead.

Lemieux entered separate from the rest, wearing, for the first time, the Penguins’ powder blue jersey that debuted in the 2008 Winter Classic. As Lemieux walked down the runway, fans were treated to a recording of the classic, drawn-out “Mario Lemie-u-u-u-u-x” goal call from legendary Penguins’ public address announcer John Barbaro, who passed away earlier this year.

It was one of the many small touches, like a team picture of both alumni teams at each blueline, organ music blaring throughout during stoppages, Pittsburgh native Jeff Jimmerson performing the National Anthem, and other scoreboard features used at Consol Energy Center that made the Penguins-Capitals alumni game special.

“Just to be out there with those guys was special. To be out there with Mario… there are a couple snapshots that will stick in my mind,” Bourque said. “The guys are a little slower, a little fatter, and there’s some gray hair now, but it’s amazing how the hockey sense is all the same.

“It was a thrill to be out there and I was grinning from ear-to-ear the entire time.”