The two two teams just faced off and we are about a minute into the game.

Marc Andre Fleury is in the nets for the Penguins, while Tim Thomas is in for the B’s. Former Penguin Dany Sabourin is serving as the back-up for Thomas. Could he get into this game? 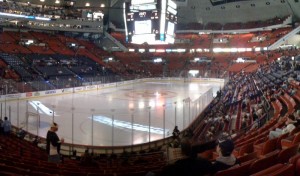 The two two teams just faced off and we are about a minute into the game.

Marc Andre Fleury is in the nets for the Penguins, while Tim Thomas is in for the B’s. Former Penguin Dany Sabourin is serving as the back-up for Thomas. Could he get into this game?? That depends on the Penguins offense…

Ponikarovsky is again skating with Ruslan Fedotenko and Evgeni Malkin… I have a feeling that the line is going to stay together. However, it really wouldn’t surprise me to see a shift of two skated with Sidney Crosby just to mix things up a bit.

More as it happens…

Tyler Kennedy has some jump in his step this afternoon. Wonder if he was reading the comments here at From the Point?? He has put a couple of shots on goal and looks to be playing that third line energy role that we all grew accustomed to while he was trying to make this team.

The Bruins will get the first chance on the power play as Brooks Orpik tripped David Krejci as he was trying to move into the slot area. Gonchar, Eaton, Staal and Cooke are the killers.

The Penguins were able to get the kill, their 21st in a row. As I mentioned in the preview today, the Penguins special teams have been pretty special of late. The PK has killed off 62 of the 72 power plays against, including a stretch of 21 in a row. While their power play has produced a goal in five straight games, going 6-16 over that stretch. (37.5 %)

The Kiev Konnection just wiped out the net and Tim Thomas with it. Both Ruslan Fedotenko and Alexei Ponikarovsky went to the net looking for a pass from Evgeni Malkin and ended up in a heap against the back boards with Thomas and the net. Now that was what I call human bowling!

The Penguins are back in the box…some where that they have grown pretty comfortable this weekend. This time it is Mark Eaton for high sticking.

The killers do it again, knocking off their 22nd in a row.

Sidney Crosby just made a great feed to Pascal Dupuis in the slot, in stride and breaking to the net. The puck glanced off of his stick and towards the net with no shot.

Alexei Ponikarovsky just left the ice with trainer Chris Stewart. No word on what the cause was, but I will keep you posted…

The Penguins were just called for an offensive zone penalty, something that you just hate to see. They had a bit of a pile up in front of the Bruins net and Fedotenko was involved in a collision with Tim Thomas… two minutes for goalie interference.

One period in the books and we are still scoreless here in Pittsburgh. The Penguins didn’t play a bad period of hockey, but they have got to tighten things up discipline-wise.

There were issued three penalties in the period, which they were able to kill off. However, you simply cannot keep giving the Bruins opportunities with the extra man. Especially considering some of the talent that they are able to parade out on any given advantage.

The Birds have outshot the Bruins 10-3 and have dominated stretches of play, however this is setting up one of those hug let down moments where the home team is wheeling and dealing, pulling ahead on the shot clock only to fall behind on the scoreboard. We will see if they are able to avoid that fate.

The Bruins are outhitting the Penguins 7-5, which is never a good thing. When this team is at its best it is playing a physical, skating game that out muscles and out works the opposition.

The Penguins will still have :41 seconds to kill off when they begin the second period.

Ponikarovsky is back on the ice…moving fine. Not sure what the issue was with him, but will find out if there are any details available post game.

Evgeni Malkin was just whistled for hooking Zdeno Chara. It wasn’t one that brought Chara down, but he got his stick parallel to the ice. That is always going to be called…

The Bruins just got on the board during their power play. Fleury did everything he could to keep it out of the net, but ended up flat on his stomach as the puck was bouncing around. It was put back towards the goal, he thought it was under him, but it squirted into the net. Blake Wheeler was credited with the goal.

The Penguins finally get their first power play of the day. Michael Ryder gets the call for slashing.

The Penguins were not able to capitalize on their power play opportunity, but they have finally broken through on Tim Thomas. Sidney Crosby threw the puck behind the net to Pacal Dupuis, who tried to wrap it around on Thomas. The Bruins goaltender made the save, but Dupuis kept working, the puck popped free and Dupuis was able to bang it home.

Dupuis gets a lot of heat, but that was his 16th goal of the season. That is right around the total you would like to see from him. 20 on the year is not out of the question.

Mark Stuart and Ruslan Fedotenko have each been given roughing minors for a scrum in front of the net. The Penguins are controlling the four on four play to this point. The puck has finally been cleared from the Bruins zone with :26 remaining on the penalties.

Tim Thomas just made a great glove save on Jordan Leopold. Leopold took a pass at the blue line, took two strides and let a wrist shot go. Thomas did the splits and snapped it up with his big trapper…

If I am not mistaken, the Colorado Avalanche hold the longest consecutive streak in the NHL with 487 in a row…

1:51 remaining in the second period…score still tied 1-1. The Penguins have had some nice opportunities, but Thomas has been on top of his game in keeping this one deadlocked. He just did what he had to do to keep the Birds off of the board during a 4 on 2 break. It could have been a bad one for the B’s considering that the late man was Sidney Crosby. Thomas made sure the puck never even got into an area where 87 would have a chance. Smothering the puck and getting the whistle.

Through two in Pittsburgh, the Penguins and Bruins are tied at 1-1. Each team has had its chances to pull ahead, but the goaltenders have been up to the task. Though Tim Thomas has had significantly more work than Marc Andre Fleury, with the Penguins outshooting the B’s 22-11.

The Penguins have taken control of this game with their physical play, pushing their shot total to 23 for the game, while the B’s are sitting at 13, only 6 more than they had in the first.

Zdeno Chara is leading this game in ice time through two with 18:02 minutes played. A huge number through forty minutes.

The game has had sort of a playoff feel to it with its tight checking, scrums and fighting for positioning on the ice. Should make for a great third period.

More as it happens…

The Penguins have pulled ahead…

Evgeni Malkin and Alexei Ponikarovsky just worked a little give and go that opened Malkin up for a shot from the top of the circle. Geno threw a wrist shot on the goal that beat Thomas. Poni went to the net with the Bruins defender. That seemed to throw Thomas off a bit…

2-1 Penguins on Malkin’s 23rd of the season from Ponikarovsky.

Crosby just made a great individual play … skating the puck from his own blue line and into the zone. He cut between two Bruins into the clear and lashed a wrist shot from between the hash marks.

Pascal Dupuis just missed hitting Chris Kunitz for a break away… Kunitz just couldn’t take the pass and it went the length of the ice.

The Penguins have really taken over this game in the third period. They are now outshooting the Bruins 2-1… (27-13) and are buzzing around the offensive zone like bees. The Bruins are having a ton of problems trying to get the puck cleared from their own zone…they just had a shift in which they turned the puck over no less than three times.

9:41 remaining in the game, the Penguins are still leading 2-1. They have had countless chances and are sitting at 29 shots in the game. This group looks as cohesive or more so than they have all season long. Their passes are on the tape, they are out working the B’s in the offensive zone and you just get a feel that the coffin nailing goal could be on the horizon here.

A strong shift by Evgeni Malkin, in which he was throwing his big frame around and came very close to scoring, seems to have fired up the B’s a bit here. They have ramped up their physical play and look like they are skating harder.

This is going to be interesting… will they knot this one up? Can the Penguins weather the storm and get the goal to close this out?

Matt Cooke just destroyed Marc Savard with an elbow to the head. A very dirty looking play… Savard was coming into the zone, made a play on the puck and was blindsides by Cooke. He definitely got his elbow out and struck Savard’s head and face. Most likely not a matter of if he will be suspended, but when. I usually do a lot of defending when it comes to Matt Cooke, but there is nothing you can say here. Very blatant… very unfortunate.

Savard is being taken off of the ice on a board… He gave a wave to the crowd that was answered with an ovation. Horrible play… let’s hope that Savard is ok.

I am about to head down to the rooms for post game reactions from the players and coaches… the Penguins lead 2-1 with 2:20 remaining. More post game…