With the Stanley Cup finally being awarded to the Los Angeles Kings and the NHL Awards and Draft lurking just around the corner, it is time that we ramp up coverage here at FTP.

Though we have provided some quick hits since the season ended and one big one in the form of the Philippe Dube’ Reebok/CCM piece, we have largely been in hiding since the Penguins were eliminated back in April – if you want to call making several radio appearances on Penguins Live, TribLive Radio and NHL Home Ice per week being in hiding that is…

With the aforementioned Awards/Draft looming, it is time to pick up the pace and get down to business… especially since we will be live and screaming at the CONSOL Energy Center come Friday afternoon/evening when the Edmonton Oilers make the first selection.

Many blogs/articles will be flying off the presses here in the FTP newsroom over the next few weeks as we get through the events of this week and barrel towards free agency, but the first order of business will be to take a quick look at some of the trades that could happen before our collective eyes on Friday or before.

Many of these have been discussed ad nauseum over the last month, but your friendly neighborhood Metz has yet to weigh in on them, aside from said radio appearances, so please bear with me… and above all – enjoy! 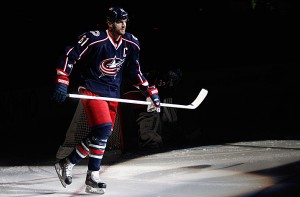 First up? Rick Nash of course!

Let me guess… you thought that I would go with Jordan Staal? Well, I can assure you that we will be speaking about him, but this Nash situation has had me riveted since I spent an unseasonably warm day down at the TribLive Radio studios breaking down deadline day 2012 back in February and I want to see how this sucker plays out!

Nash has been a hot topic over the past few weeks, especially in light of the controversial “JVR vetoes trade” talk that circulated in and around the Philadelphia area and folks have him ending up with everyone from the Flyers to the Ottawa Senators… if those internet experts are correct that is!

If you are wise, you are avoiding the drivel on this subject and following guys such as Aaron Portzline to get your Rick Nash news. Portzline is one of the best “beat guys” in the business and he feels that Nash is popping up on radar in New York (Rags), San Jose, Philadelphia, Toronto and possibly even Carolina, who is purported to want to make a splash this off-season.

That is pretty much the same list that existed back in February when Nash ended up holding his address for a few more months, but the smart money says he is going on or before this Friday.

Andy Strickland, of www.truehockey.com, has gone on record as saying that supposed asking price for the ONE time 40-goal scorer is 2 prime roster players and 2 prospects. That may be a bit obscene for a guy who has never scored more than 79-points in a season, but the desire to win in July makes general managers do some crazy things.

Look for Nash to end up with the New York Rangers, who came close to landing him back in February, if for no other reason than they have the assets to actually get a deal done.

The above comment aside, my gut feeling is that he ends up with a team that we haven’t heard about as of yet. That is what happens more times than not… a very wise hockey man once told me that 99-percent of the trades that happen have not been talked about publicly by anyone and I have found that to be true. The speculation is usually spot on about WHO is being traded, but the destination almost always comes out only when a deal is done or very close to it.

Another big name who could be on the move this week is Roberto Luongo.

Let’s be honest, Luongo has been an abject failure in Vancouver. Sure he has posted some amazing statistics and has helped lead the Vancouver Canucks to the upper echelon of the league, but his failures have all come on the largest stage – the Stanley Cup Playoffs.

Luongo and the Canucks heading home without a Cup has become as much a part of spring as the blooming of flowers, the rains of April and the sneezes that accompany my annoying allergies. Though it hasn’t always been Lu’s fault, he has become the poster boy for those failures and he is in need of a serious change of scenery.

Kevin Allen, uber respected hockey scribe from USA Today, has identified the Columbus Blue Jackets, Toronto Maple Leafs and Florida Panthers as potential destinations for Luongo and if Kevin says it, it is usually true. This guy doesn’t dabble in rumor or innuendo; He deals in truth and speculation that teeters on the edge of fact. 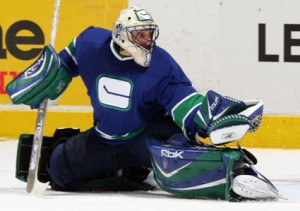 The emergence of Cory Schneider has helped expedite this change and Lu’s unsolicited willingness to waive his no-movement clause speaks to the fact that something could and probably will happen at the CEC. I mean, after all, what better place than a hockey arena housing the 30 General Managers and their henchmen to dim the lights, strike up the Barry White and ultimately get it on!

The Draft also serves a nice place to see the rights to unrestricted free agents moved to a General Manager who feels that he just might have the magic words that get a deal done with a player prior to his hitting the open market and securing one of the biggest paydays of his life.

Though the move fails on many occasions, such as two years ago when both Paul Holmgren and Ray Shero swung and missed with Dan Hamhuis, it occasionally works. To find positive examples look no further than Holmgren who has seen this tactic work with Scott Hartnell, Kimmo Timonen and Ilya Bryzgalov.

Anyone who has asked and some who haven’t have heard me say that I just have a feeling that the rights to Ryan Suter could be moved on draft day. Sure there has been a lot of pillow talk pointing to the fact that the Predators and Suter want to hold hands and skip off into the sunset together, but it isn’t going to be easy, which is why if Suter is dead set on hitting the open market the team may deal him for some assets and still take a crack at him on the open market.

Zach Parise could be in the same boat. He just got to his first Stanley Cup Final and may be thinking that the Devils could do it again, BUT… he’s no dummy.

Marty Brodeur played a huge role in the Devils’ long run and he may not even play next season, let alone beyond. Yes, there are plenty of other young assets in the fold, but they may not be enough to win now, which is something that Parise is going to want after getting a taste of it. He, like Suter, may want to hit the market just to see what is out there, which is why the Devils could deal him and still make a play towards keeping him after July 1st.

Josh Harding was another name that would have been intriguing, but he has since inked a 3-year deal to stay with the Minnesota Wild. This may not be an end game, as he has a stated desire to be a starter, but it certainly removed his rights from the conversation. Could it be the ever popular sign and trade?? I guess we’ll have to wait and see…

Last but certainly not least as we head into draft weekend, Jordan Staal.

Not surprisingly, Jordan Staal has been a pretty hot topic here in the Burgh over the past month or so, especially following his breakdown day interviews, which didn’t necessarily scream “I WANT TO STAY!”

Staal believes that he is ready for more responsibility and wants to slide out from under the massive weight that is playing behind Sidney Crosby and Evgeni Malkin. He has long been looked at as the team’s third line center, but his game is evolving a bit and he’d like to do more than just “kill penalties.”

The kid from Thunder Bay has already proven to be a great shut down center, but he wants to flash his offensive abilities on one of the top two lines. He would also like to get a taste on the power play, something that doesn’t happen much.

Staal has been rumored to have asked for upwards of $6 million dollars per season for seven years, something that might be a bit tough for the Penguins to pull off. This is shaping up to be a perfect example of each side needing to bend a bit to make it work.

Is he willing to do that? Time will tell… he already has a Stanley Cup, so it may be a little bit easier to slide into another organization that is a little further away from winning in exchange for being the face of the franchise.

Staal’s suitors apparently are many, but the Carolina Hurricanes have become the sexiest pick based on the fact that two of his brothers are already in the organization and their general manager, Jim Rutherford, has coveted the pivot since his draft year. Rutherford even gave an interview a few weeks back where he mentioned asking Eric Staal to change position to accommodate an incoming asset – could that be Staal?

The Edmonton Oilers, Columbus Blue Jackets, Buffalo Sabres, Toronto Maple Leafs and countless other teams have been mentioned in the same breath with Staal, so anything is possible.

Though I have long been on record as saying that I feel Staal will start the season with the Penguins, my opinion seems to be in the minority, which really makes this an interesting scenario!

Ray Shero has again stated within the last 24 hours that he doesn’t want to move his towering third line center and that his goal is still to sign him. Will it happen? Will Shero move Staal and the remaining year on his contract to make a splash and add assets to his organization during the draft? Could he handcuff him to Paul Martin in hopes of clearing an extra $5 million dollars off of the books? Heck, that option dovetails nicely with the fact that Shero has also stated that he is planning on moving a defenseman or two this off-season.

Well, any of the above is possible, which is why you need to stay tuned all week long, as we are headed towards the most exciting time of year for hockey fans! The time where the teams are rebuilt and the new champions crowned – at least on paper!