First of all, I haven’t gotten to comment on this, so congratulations to Evgeni Malkin for winning the 2009 Dapper Dan Sportsman of the Year Award! It is a big honor to win the award in this town and he joins a long list of great Pittsburgh athletes who have won it in the past. Sidney Crosby has already won it twice in his young career and Geno was thrilled get into the club… 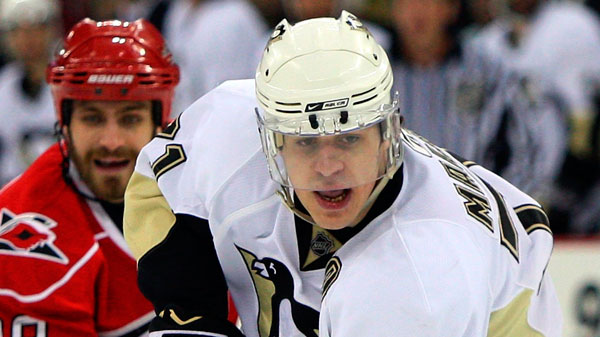 First of all, I haven’t gotten to comment on this, so congratulations to Evgeni Malkin for winning the 2009 Dapper Dan Sportsman of the Year Award! It is a big honor to win the award in this town and he joins a long list of great Pittsburgh athletes who have won it in the past. Sidney Crosby has already won it twice in his young career and Geno was thrilled get into the club…

“I am so excited,” Malkin said. “It is an award that Sid has won twice before. I had a great year. It feels good to win. I can’t stop performing. I need to keep working every year so that I can keep reaching the next level.”

Malkin’s 2009 was an impressive one that saw him win the Art Ross and Conn Smythe Trophies en route to helping the Penguins hoist their third Stanley Cup… the Dapper Dan Sportsman of the Year award is a very fitting bookend to a great season for the 23 year old.

I think the DDA was a nice boost to Malkin’s confidence, as he has been playing some very inspired hockey since finding out that he was nominated for the award. His improved play has also been attributed to a hand full of meetings that he had with the coaching staff, at least in his own estimation.

“I had a couple meetings with the coaches and they helped me change my game to get me back to the level I was at last season,” Malkin said. “Now I feel very good out there.”

It seems that the coaching staff has also made some changes to the line-up and its configuration that have helped Geno out. They have shifted him to the right half wall on the power play, getting him off of the point, a position that he hasn’t been thrilled playing in the past. The move has opened up his options with the extra man and he has started to get himself into prime shooting areas a lot more often.

The coaching staff has also experimented with a couple of new wingers. Nick Johnson has played with Malkin on and off since being recalled from Wilkes Barre-Scranton and the two have developed some chemistry. Geno has also skated more than a few shifts with Jordan Staal…someone who he has had great success with in the past.

Look for Malkin’s hot streak to continue, as he has always been a strong second half performer during his career. It is also worth noting that his parents will be heading over to North America to watch their son compete in the 2010 Olympic Games in Vancouver. They will then return to Pittsburgh where they will stay for the remainder of the season… great news for Geno, bad news for the NHL. If there is one way to get Malkin clicking on all cylinders, it is to place his parents in the stands.

Johnson Gets the Call:

After beating the Detroit Red Wings yesterday afternoon, Marc Andre Fleury will get tonight off in favor of Brent Johnson. Johnson will be contested by the Sabres Ryan Miller who has been playing some amazing hockey for his club.

Most involved are expecting tonight’s affair to be very similar to that of the 2-1 victory scratched out by the Penguins yesterday.

“Buffalo has a good goalie, Miller, who’s playing real well, and I think it could be the same game,” Malkin said.

Mark Letestu, who filled in on the Penguins third line yesterday while Jordan Staal skated with Malkin and Pascal Dupuis, is starting to feel a bit more comfortable with the parent club. However, that doesn’t mean he has completely settled in.

“Originally, coming up here, it was pretty overwhelming for me,” Letestu said. “But, I thought we played real well. We dominated most of the game. Hopefully our confidence is high rolling into the next one.”

He went on to add that he has some pretty big shoes to fill.

“Obviously I’m not Jordan Staal, but I’m hopefully filling in the best that I can.”

Letestu’s fellow Wilkes Barre-Scranton call-ups (Nick Johnson and Chris Conner) have put the pressure on him by each notching goals this season.

“I think everyone from Wilkes-Barre/Scranton has scored, so I have to get one in here soon.”

I have been asked quite a few times over the past two days about the names RJ Umberger and Raffi Torres… I will say this much, the Penguins had interest in RJ Umberger before he originally signed as a free agent with the Philadelphia Flyers, but I hadn’t heard him mentioned in a rumor until Mark Madden brought him up this weekend. Madden’s mention seemed to spark some talk that come out Columbus over the weekend. Overall, I wouldn’t count on it unless he is available on the cheap, which I doubt he would be.

Torres is a player whose name has been tied to the Penguins on numerous occasions, but I just don’t think he is the answer. Strikes me as being too similar to players like Talbot, Dupuis and Craig Adams… though he has a bit more offensive upside.

As far as scouts go…only Philadelphia and Minnesota were in the building yesterday. We will see tonight.

In my opinion, the dust from all of yesterday’s moves is going to have to settle before the Penguins get involved in anything.

Getting Jason Blake out of the Eastern Conference is huge for the Penguins. It seems that the diminutive forward has a knack for burning them and has done so on a regular basis since his days on Long Island. If there was a silver lining in bring the monster that is Dion Phaneuf into the conference, it was that of Blake making his exit. Small victories are always worth tracking…

I will be on XM Home Ice before and after tonight’s game. Listen for me with Boomer Gordon at 6:25pm EST as we preview the game and at 10:20 with Jamie Shalley as we discuss the aftermath.

This author has not added a biography. Meanwhile rlenocker has contributed 3 posts. Click here to view them.