The Penguins injury woes continue as they lose Evgeni Malkin to a torn left MCL and ACL. 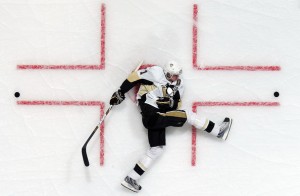 If I was given an opportunity to bet money on the fact that Evgeni Malkin had suffered a significant knee injury against the Buffalo Sabres last night, I would have thrown my life savings on it. I am not happy about that fact, but I have seen enough footage of knee injuries over the years to know that knees just don’t bend the way that Geno’s did when Tyler Myers collided with him.

If the hit itself didn’t tell the tale, the fact that Geno tried and failed to put weight on his right knee when getting up did just that. I immediately got that bad feeling that you get when a superstar suffers a significant injury. The feeling grew as I was treated to replay after replay of the hit. I saw it so many times because I was sitting at home watching the incident instead of at the CONSOL Energy Center. (Still dealing with the retched sickness that has plagued me all week)

All of those horrific thoughts from last night were confirmed by Penguins’ head coach Dan Bylsma this afternoon following the team’s 11:30am practice. Here is the lowdown from the Penguins official site.

“Evgeni Malkin had an MRI this morning. The results show that he has a torn MCL and a torn ACL. At this point in time we are discussing options with the doctors on what to do next.

“This is a difficult injury for him. It was kind of a fluke situation going into the boards with a guy. That’s a tough injury for Geno. We have dealt with games without him. We’ve managed to find our way without him. That’s what we’re going to have to look at now.

“We’re discussing options with our doctor. Surgery is a possibility. I’m not sure if there are rehab possibilities. But right now I just got the news on the MRI.”

Unfortunately, Geno tore both his MCL and ACL, which all but ends his season. Yes, we did see Sergei Gonchar come back from a significant knee injury back during the 2009 playoffs, but that was only a partial tear of his MCL – a completely different situation than we are dealing with here.

Bylsma went on to reveal some additional info via the Pens site about the injury; including the fact that they do not believe there was any intent on Myers’ part. He also admits that Geno’s “other knee” was completely healed. (It was a happenstance situation)

On how big of a blow Malkin’s injury is, especially as he had started to get healthy again:
You’re talking about Evgeni Malkin and the quality of player that he is. He’s a guy that’s won a scoring title and a Conn Smythe. We were anticipating getting him back in the lineup and healthy back in the lineup. This is a difficult injury for him.

On if there was any intent to injure or carelessless on the play that led to Malkin’s injury:
It really was the second part of the contact that made the hit. That was two guys kind of going into the boards on their own that happened to land on each other, which caused the hit. I don’t think at the point of injury that (Tyler) Myers had any intent of even making contact with anybody.

On if Malkin’s other knee was pretty much healed:
Yes. 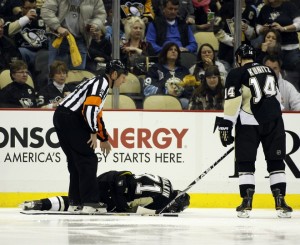 This is a devastating injury for the Penguins, but it isn’t the end of the world. The team has proven to be very resilient this season without Jordan Staal and recently both Sidney Crosby and Malkin. They are riding a five-game winning streak and have adopted a more defensively style that will serve them well as the season rolls on.

It is also worth noting that they should be getting Sidney Crosby back at some point in the semi-near future, at which point they will have a center brigade that features Crosby, Staal, Max Talbot, and Craig Adams. That group isn’t the same as the one they could boast with Malkin, but it is still very capable.

I am not convinced that this move will prompt Ray Shero to target a center, but it will allow him a bit of flexibility to make a move or two that he might not have had on his radar yesterday.

This is a tough break for Geno Malkin, who has not had a very memorable season to this point. Let’s hope that the repairs to his knee go well and that he can make a full recovery — a recovery that will set him up for a monster season next year.