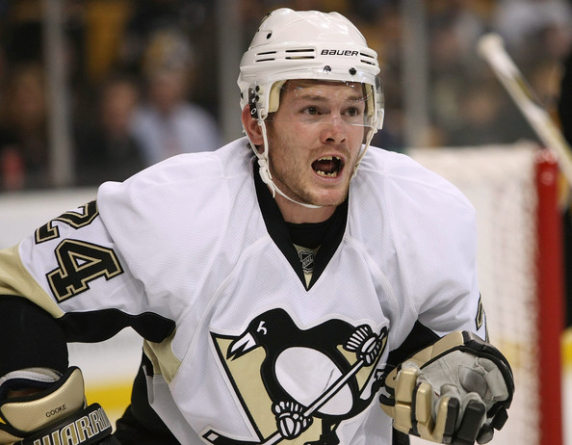 Matt Cooke, left without a deal with the Pittsburgh Penguins late on day one of unrestricted free agency, inked a three year/$7.5 million dollar deal with the Minnesota Wild Friday night.

Say what you want about Cooke, but he was a true warrior on the ice and left his heart and soul out on the frozen sheet on a nightly basis. He walked on the edge of right and wrong during most of his tenure in Pittsburgh, but did a masterful job of turning himself and his game around two years ago following a suspension that kept him out for the remainder of the regular season and the Penguins opening round loss to the Tampa Bay Lightning.

Cooke has been one of the most polarizing players to ever pull on a Penguins sweater. He was hated by entire fan based in Boston and Ottawa following incidents that resulted in injuries to Marc Savard and Erik Karlsson respectively. He drew the ire of many others around the league for debatable hits, collisions and stick work, but he was near universally loved by the fans in Pittsburgh.

The baggage mentioned above is probably the main reason why Cooke isn’t returning to Pittsburgh. Combine that with his age and the money tied up in the rest of the recent signings and you have a recipe for his moving on.

Though Penguins management was always supportive of Cooke, it was pretty obvious that they had tired of said baggage that came along with the player. Even after changing his ways, controversy seemed to follow, as it did in the Karlsson situation. His cashing a Penguins paycheck at times made the team look a bit hypocritical when publicly making statements about officiating etc.

He is and was the type of player that people can’t easily forget and it will be weird not seeing him jump the boards as part of the Penguins’ third line – which at a time was considered the best in hockey with he, Jordan Staal and Tyler Kennedy.

Sadly, that entire unit has since moved on and it will leave a big hole behind the Penguins top two lines centered by Sidney Crosby and Evgeni Malkin.

It isn’t yet known exactly how that line will be configured next season, but it would seem that Jussi Jokinen will pair up with Brandon Sutter and Dustin Jeffrey. It will make for an interesting camp battle this fall that is for sure.

Keep in mind that there are still two months and plenty of time for Ray Shero to work with, so there could be additions and subtractions on the horizon that will affect the third line.

Regardless of how it all ends up playing out, it will be awfully strange not seeing a rabid and tenacious looking Matt Cooke cruising the ice in his #24 Penguins sweater.