With Leopold’s status being unknown for the foreseeable future, the Penguins have had to consider other alternatives in formulating their line-up for game three in Ottawa.

The Penguins hit the ice Saturday morning for an option practice. Nine players took the ice, while the others reported for off ice workouts, meetings, treatments etc. Jordan Leopold, who took a massive hit from Andy Sutton during game two wasn’t one of them. Leopold has been listed as day-to-day, but there has been no official information given on his prognosis at this point.

“I don’t have one this morning, actually,” said head coach Dan Bylsma. “He did not come in. He will be re-evaluated today. He is definitely going to be day-to-day and will not be on the ice today or tomorrow.”

The hit that Leopold sustained was a big topic of conversation for the Penguins this afternoon. While none of the players have been overly critical of the league for deciding not to discipline Andy Sutton, they are very concerned for their teammate. Not surprisingly, most seemed to be more shaken by the sight of Leopold being down and out on the ice for several minutes after the hit.

“We have to respect it. With everything that happened this year, they really took the time to think about it and did what they thought was right.” 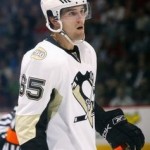 With Leopold’s status being unknown for the foreseeable future, the Penguins have had to consider other alternatives in formulating their line-up for game three in Ottawa. The team recalled defenseman Ben Lovejoy from its American Hockey League affiliate in Wilkes Barre-Scranton and the youngster will meet the team in Ottawa. Dan Bylsma also has veteran Jay McKee at his disposal, who has found himself in and out of the line-up over the second half of the season.

McKee is an intriguing option, as he came to Pittsburgh hoping to compete for a Stanley Cup Championship, something that eluded him during his time in Buffalo and St. Louis. The fact that he is well rested should bode well for the team and his steady, shot blocking style could really fit the mold of what the Penguins need moving forward in this series and in the playoffs in general.

“You prepare all summer and all season long to get into the playoffs,” McKee said of the current situation. “You don’t want to see your teammates get hurt like that, but it opens up a spot for me. I came here for this opportunity, so it is a good feeling.”

To echo McKee, it is never good to see an opportunity created by an injury, but at the same time it is great to have a seasoned veteran ready and able to step into the line-up at a moments notice. It wouldn’t be surprising to see McKee come and play some great hockey, as this is precisely what he had in mind when he signed with the Penguins this past summer.

Having depth, especially on the blue-line is something that Ray Shero has done a great job of during his tenure in Pittsburgh. He has made it his mantra to have 8 to 10 “NHL caliber” defenders in his cupboard and that depth has bailed the Birds out on numerous occasions. Last year it was Philippe Boucher with his all around game and now it is Jay McKee with his unique ability to kill penalties and keep pucks away from his goaltender.

“Jay is a penalty killing guy and a shot blocking guy,” Bylsma said. “He has been an excellent penalty killer for us all year long. We are adding a good asset when Jay is on the ice.”

The Penguins were set to travel to Ottawa Saturday evening and will be on the ice Sunday at ScotiaBank Place at 10:30am. The Pens and Sens will lock horns for game three Sunday evening at 6:30pm.