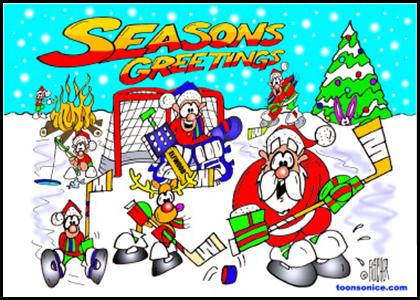 Just wanted to take a few minutes to wish you all a Merry Christmas Eve! I will have a full Christmas blog up tomorrow, but had a few moments in between running and thought I would check in.

The Penguins did their part in making our spirits bright with a great win in Washington last night, here’s hoping that is an indication of what they might be able to do on New Year’s Day.

I thought that the game was a very entertaining one to watch, as most between those two teams tend to be. Not sure about you, but I couldn’t help but think of next week’s 24/7 as I watched… what will the guys be saying about the Ovechkin hit on Malkin, Malkin’s interference penalty on Ovechkin, the Crosby goal and the shoot-out. I have a feeling that it is going to make for some very compelling television!

I thought both teams played very well and either could have won the game, but I did have find one major fault in the Penguins game… please Dan Bylsma, I implore you, stop playing Kris Letang with Alex Goligoski under any circumstances.

For as good as Letang has been playing this season, putting him out there with Go Go brought him down ten notches. It is almost like he picked up Go Go’s game and instead of him making the duo better, they made each other worse.

The pair made bad decisions with the puck, allowed too many forecheckers to get behind them and allowed a short handed goal. They were also on the ice for the “close call” against Mike Green. Stay away from that pairing…

Other than that, the night was a rousing success and one that proved that the Penguins can compete with the best in the conference. They have had close games with the Flyers, the Rangers and now the Capitals and the remaining battles with all three should be amazing.

I am about to head out to my aunt’s house for our annual Christmas Eve extravaganza. I hope that you are all doing something similar… please have a happy, safe, and healthy Christmas Eve with family, friends or whoever you tend to spend it with. Look for a full Christmas blog tomorrow…

Have a cool Yule everyone!

Damn link was expired… here is a new selection: