Well, that was some ride, wasn’t it? It was only fitting to end things with a 1-0, game seven thriller to cap a largely unpredictable series and a stunning comeback for the Tampa Bay Lightning. As we said several times throughout, this series had just about everything.

Kudos to the Pittsburgh Penguins for an outstanding season and an amazing will to fight through all kinds of adversity. There’s no doubt in my mind that, with Sidney Crosby and/or Evgeni Malkin in that lineup, this one wouldn’t have ended up going Tampa’s way. But, in the end, it did and now the Bolts are off to the Eastern Conference Semifinals and a date with division rival Washington for a berth in the Conference Final.

Before we get to that, the Pens/Lightning series is worth one final reflection, at least and, after Metz tackles the unenviable task of accounting for what went wrong down Pittsburgh way, I’ll jump back in to hash out a handful of things that the Bolts did right:

Metz on the ousted Penguins:

Jon and I knew that this series wouldn’t go on forever and that one of our teams would have to head home for the summer. We also talked openly of wishing that each of the teams could move on, as the series was damn entertaining and we have been enjoying the heck out of our collaboration. But, as is the case with most team sports, there is no “alright, we both win” situations and it is I that has been put in the unenviable position (as JJ said in his lead in) of explaining why YOUR Pittsburgh Penguins are hitting the links as we speak. (Well, maybe not yet, considering they have their final clean-up day tomorrow… but Saturday? It’s on!)

Though the Penguins had what some would call a stranglehold on the series having taken a 3-1 lead through four games, it really wasn’t that tight of a death grip. Anyone who had been watching the series realized that the Penguins had shown plenty of Achilles heels during those first four games. The biggest of which was their inability to score goals.

You simply cannot win hockey games when you aren’t putting the puck in the net.

Aside from Game 5, the Birds did a fine job defensively in the series, but as you saw in Games 1 and 7, the best formula for their winning was to keep Tampa Bay scoreless and that wasn’t going to happen every night. Heck even the games that the Penguins were able to win came down to one goal (minus one Kunitz empty netter) and they were very hard fought road wins — wins that very easily could have gone the other way had the Lightning gotten a bounce here or there.

For all of their dominance for stretches of time during the series, they never truly got to Dwayne Roloson. They allowed themselves to be pressed to the perimeter time and time again; taking harmless shots from the outside and let’s face it, that wasn’t going to enough against a hot Roloson.

Roli is what I would refer to as a great “first save goaltender.” He almost always makes the first save and you need to get to the many rebounds that he kicks to his left or into the slot to score on him. The Lightning played their defensive scheme to a capital T and mirrored the Montreal Canadiens of last spring in knocking the Pens off in 7.

At the end of the day, the Penguins were a very disappointed group knowing that they allowed an amazing opportunity to slip away, but we cannot overlook the amazing things that this group was able to accomplish. A lot of teams would have folded up the tents and packed it in after losing Sidney Crosby and Evgeni Malkin… not this group. They battled on a nightly basis, produced the second best season in franchise history and came within one win of the conference semi-finals when many around the league had written them off back in January.

It is always sad to see my boys head home for the year, especially because that means that my season is pretty much over as well, but I must commend the Lighting and Guy Boucher. They put together an amazing series. The Penguins lived and died by Dan Bylsma and Marc-Andre Fleury throughout the season and in this one, Boucher and Roloson were a little bit better.

Good luck to the Bolts… you’ll need it against a Washington team that looks very hungry.

Thanks to my main man Jon Jordan! Though the ride left me wanting more, it was one that I will never forget. I had a blast finally working with you and I hope that we can do it again in the future… not always sure what the hockey readers think all the time, but I think we did one hell of a job.

I will be tipping a glass your way on Friday night…

JJ on the Victorious Lightning:

For the Lightning, first and foremost, you have to credit their collective resiliency. To come all the way back from a 3-1 deficit is no small feat. At the same time, head coach Guy Boucher gets the latest in a long line of pats on the back this season for staying the course himself despite the once glaring deficit. 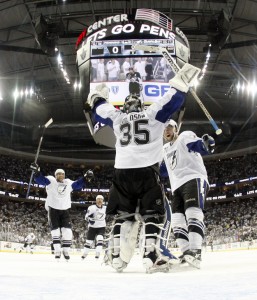 From the start, Boucher predicted that this would be a seven game series and, though his forecast of a triple overtime final fell short, game seven was every bit as tense. Still, to keep the club together and as confident as their play showed, particularly to start the comeback in game five in as convincing fashion as they did, is a true testament to how sold the Bolts are on their bench boss.

Next, you have to credit the Lightning defensive play and goaltender Dwayne Roloson. For the most part, Roloson didn’t have to be fantastic and, for what it’s worth, he did have some down moments earlier in the series. But, when Tampa Bay needed him, he stood tall. In game seven, the epitome of crunch time in professional sports, he was fantastic. From a bottom line perspective, that’s absolutely all you can ask for.

But Roli was aided by a complete defensive effort in front of him, with two areas sticking out more than any others.

One, the Lightning as a whole – forwards and defensemen – made it terribly difficult for Pittsburgh’s breakout to make it through the neutral zone and once they were in, limited most of the Penguin chances to the outside, continually jamming up the middle effectively. And two, the penalty kill was simply incredible. Yes, Pittsburgh’s power play had its fair share of struggles throughout the year and, in particular, down the stretch once Crosby was lost, but in this series it was non-existent. What that does on the positive side for the prevailing club is as immeasurable as how back-breaking it is for the club continually failing to score.

Finally, Tampa Bay got contributions from up and down the lineup. Regular season leading scorer (and Hart Trophy finalist, as announced today) Martin St. Louis was the Bolts’ leading scorer in the series as well but, beyond that, a quick glance at the stats shows how much of a team effort the Lightning’s series win indeed was.

Simon Gagne hit for seven points, as did Steve Downie (despite only playing in six of the seven games, thanks to a suspension).

Captain Vinny Lecavalier had a pair of goals and six points himself. Depth players such as Sean Bergenheim (who had near-identical tallies in games six and seven that were each as clutch as they come), Dominic Moore and Nate Thompson all found the back of the net.

Defensemen Eric Brewer and Pavel Kubina did the same.

Ryan Malone fought through injury to score a huge goal in game six and was a thorn in the side of his former teammates.

And, though Steven Stamkos was offensively neutralized, from a goal-scoring standpoint for six out of the seven games, he did manage four points in total and, generally-speaking, was involved throughout, making an impact wherever possible.

In the end, the chess game went Tampa Bay’s way. The Penguins pushed them to the brink and the Bolts bounced back with a vengeance. It will be interesting to see what kind of momentum the comeback provides the Lightning as they take on Washington but, no matter what, they can look back on their efforts in this series with an unfettered sense of pride.

That’s exactly how I’ll be looking back on the work that Metzer and I did together for these seven games – and I’ll wish him the best of summers (chock-full of cold ones, of course!) as I sign off for now and look ahead to what should be one hell of a battle between the Caps and Bolts.