Some off day news, notes and thoughts…

Though the Penguins practice this morning was canceled, I had a couple of things that I wanted to share and or get off of my chest.

First of all, Goal Magazine (and the Penguins site) has links to the Winter Classic masks of Marc Andre Fleury, Brent Johnson, Semyon Varlamov and Michal Neuvirth. Nothing groundbreaking, but they look pretty cool. Interesting that MAF chose a scheme more in tune with the old school Gilles Meloche mask, than one that would have matched this year’s jersey scheme. Though I like it just the same… I am sure you guys have seen these, but in case you haven’t check them out here: Winter Classic Goalie Masks.

Don’t read too much into the fact that Deryk Engelland skated with Geno Malkin yesterday during practice. Sure it was a great novelty situation, but it had much more to do with the bodies who weren’t skating (Kunitz and Talbot). Engelland and Godard have been the healthy scratches the past couple of games and the team slotted them into the line-up to run their drills without upsetting the balance of their other pairings and lines. Sure it is an intriguing thought, mainly based on the fact that it would certainly add some “punch” to the second line, but it isn’t something that is going to happen in a game. I wouldn’t even have felt compelled to mention it today, but I am still seeing folks blowing up my twitter feed about this groundbreaking news.

Very cool? Yes… Mean anything? No…

I can understand the anger that is going around regarding the Alumni Ticket situation, but to blame the Penguins or Ticketmaster is just ridiculous. I agree with you that the entire process for distributing tickets for events is broken, but that isn’t the team’s fault. The same exact thing happens with every concert, play, show, circus, and wrestling event that rolls through town. Agencies have long been able to procure the best seats and sell them off market for a premium…you can’t blame the teams, bands or organizations for that.I know plenty of season ticket holders that were left out in the cold without tickets… no pun intended, but most of them are content to have been given the first chance at tickets to the actual “Winter Classic.”

You are never going to stop scalpers and scalping agencies from doing what they do… it is very unfortunate, but it is something that is always going to plague these events.

The thing that I have a problem with is that the teams didn’t hold back two or three thousand seats for their season ticket holders. They could have easily held a batch back and had a lottery for that group. I know everyone doesn’t agree with that thinking, but those are the kinds of perks that are supposed to come with being a season ticket holder. Just saying…

Final thought on the situation… individuals who bought $25 dollar tickets and are trying to sell them on Ebay for $4,600 is just ridiculous. Stub Hub’s mark up is insane enough, but trying to get that kind of scratch is just insane. Also, for season ticket holders that are upset about not getting Alumni tickets… there are a ton of creative “scalpers” on craigslist right now who are willing to swap Alumni tix for your Winter Classic seats. It is an option if you want to swap out…

If you missed the amazing premiere of HBO’s 24/7 Penguins/Capitals – Road to the Winter Classic, it is now available online for your viewing. I know that there were many links flying around over the past couple of days, but this is one that we know will not be taken down, as it comes directly form the NHL.

The Penguins gave back to the community as they so often do yesterday afternoon as they delivered presents to the convalescing children over at Children’s Hospital. Here is a shot of Sidney Crosby delivering a present… credit to the Pens official twitter for posting it: 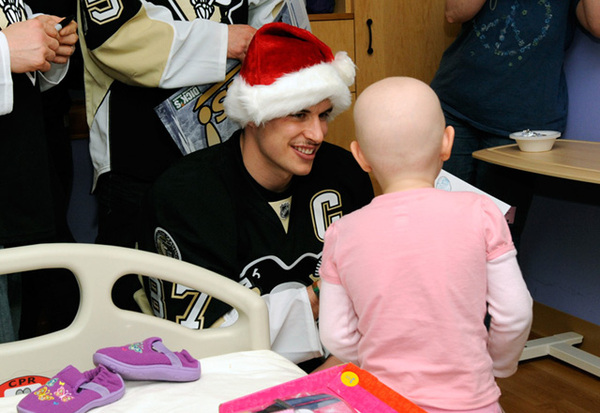 The first lot of items from the Civic Arena netted $100,000, which was roughly $40,000 more than the organizers and team thought according Fox Sports. I know from first hand experience of trying to bid on a couple of items that I was monitoring, that most went for far more than anyone could have expected.

The site, Iglooseats.com was a huge hit according to Shawn Allen, the firms COO, who talked with Fox Sports.

More than 900 bidders spent roughly $100,000 on 504 items featured in the Internet-only auction hosted by AssetNation Inc., a private, Houston-based firm with offices in Seven Fields. That was about $40,000 more than anticipated, said Shawn Allen, the firm’s chief operating officer.

“We were incredibly pleased with the activity of the auction,” Allen said. The auction’s host website, iglooseats.com, received more than 2 million visitors, he said.

You can read the entire article here:

Another lot is planned for January…

I’ll be back with more later… but in the meantime, enjoy this Song O’ the Morning… er… make that afternoon! (Song O’ the Morning is something that long has been a part of my facebook page, and I decided to trot it out here for you… hopefully you will hear some things that you like or find some new bands!)