You might recall an article from the “Morning Links” a couple of weeks back about the folks over at Wendell August Forge working on a special project for YOUR Pittsburgh Penguins. 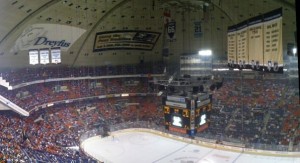 You might recall an article from the “Morning Links” a couple of weeks back about the folks over at Wendell August Forge working on a special project for YOUR Pittsburgh Penguins. Well, here is the official announcement of their hard work.

The Pittsburgh Penguins will distribute a ‘commemorative ticket’ to all fans in attendance on Thursday, April 8 when the final regular season game in Mellon Arena’s history is played.

Each one-of-a-kind, aluminum ticket, presented by Trib Total Media, will be handmade by local artisans and craftsmen at Grove City-based Wendell August Forge.

The commemorative ticket will feature Mellon Arena using a design similar to the actual game ticket used by Season Ticket Holders that evening.

Wendell August Forge, America’s oldest and largest forge, has been producing hand-wrought ornamental metalware since 1923. The business suffered a catastrophic loss on March 6, 2010 when a fire destroyed the company’s workshop, offices and store in Grove City – burning them to the ground.

“When we received the order from the Penguins in early March, we were euphoric,” said Wendell August Forge’s president Will Knecht. “Days later, tragedy hit and our company’s immediate future was uncertain until the Penguins reached out to offer their support. This order is historic not only because it is the single-largest order in the Forge’s history, but will also be the first piece produced since the fire. I can assure you there is a lot of pride going into each ticket.”

“The Penguins and Trib Total Media are looking forward to celebrating the final regular season game at Mellon Arena with our fans and this commemorative ticket,” said Penguins vice president of marketing James Santilli. “We are grateful to have the opportunity to work with a local company like Wendell August Forge that offers such unique products.”