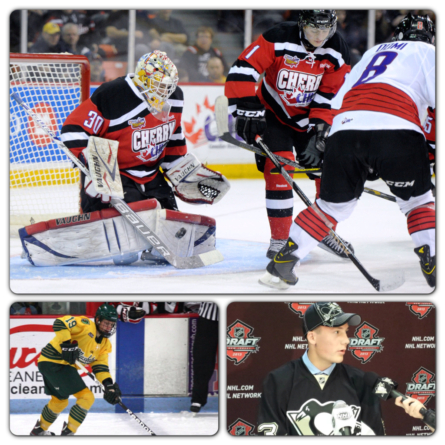 Capsules on each of the Penguins six draft picks.

I did these draft capsules for my Beaver County Times piece on the draft that you can read HERE. I am borrowing the capsules so that you can catch up with all six of the Penguins 2013 draft picks.

ISS Scouting Report: Jarry played the year behind one of the top goaltenders in all of Major Junior Hockey but still managed to showcase himself incredibly well when his opportunities arose. He is a very focused and confident goaltender with great low reactions and quick lateral movements. He has excellent rebound control with his pads and has gotten the reputation as a kid who just stops pucks.

ISS Scouting Report: Guentzel is a creative and electric player who displays very good skills. He is capable of centering your number one line and playing on the point on the power play. He brings a great combination of skating, speed, and balance and hockey sense and has a great work ethic. He answered several questions about his lack of size and production last season when he averaged over a point-per-game.

ESPN Boston’s High School blog had one scout’s take on Segalla – “He has an over-the-top compete level. It’s second to none for kids around New England. He might play a little out of control at times, but he’s very strong, extremely physical. He’s tenacious.

Birks has size and isn’t afraid to use it. He also possesses a booming shot that he often unleashes from the point. The big defenseman was also one of the youngest players invited to a recent evaluation camp hosted by the Montreal Canadiens.

Redline Report: “Playing Tier II plus getting traded mid-season didn’t help him, but we keep coming back to the fact that he’s got a higher skill level than many more highly rated prospects from around the OHL.”

ISS Scouting Report – His flash and creativity on the puck was on display, spins off checks and remains in possession [of the puck]. Had good physical game, not one to shy away from oncoming pressure or dish it out. Ability to lay some heavy hits and great work low in the offensive zone, fierce puck battle and coming out with possession consistently. He used the boards extremely well to beat defenders at the blueline or low, chips puck and rolls off the check. Josephs needs to add size and strength in order to avoid being labeled as a junior level star. Not a committed defensive player at this point in time.