The Penguins fall to the Boston Bruins 3-1 in an epic clash of two of the best teams in the Eastern Conference. 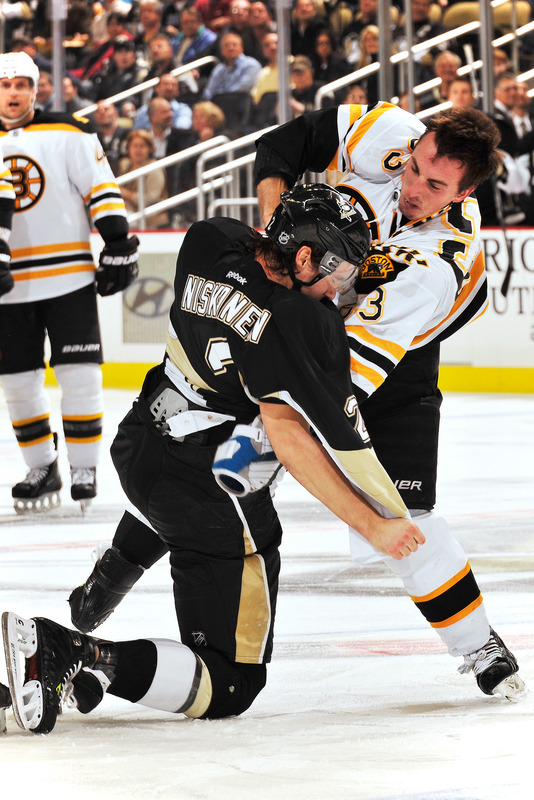 The Penguins and Bruins, who were separated by just 3 points at the top of the Eastern Conference coming into tonight, met at the Consol Energy Center in what was supposed to be an epic clash of two of the league’s best. Unfortunately for the Penguins they were never really able to get to their game and when they did, Tim Thomas was there to slam the door on them.

The Bruins looked like the better team for roughly two periods, though the Penguins had the edge in shots and hits. The Penguins owned the third period, but were only able to get one puck by Thomas who made 22 stops in the stanza.

To a man, the Penguins were disappointed that they didn’t make Thomas’ life a bit more difficult, especially on two 2-man-advantages that they had against the B’s during the second period that totaled 3:10.

“Yeah, he made some good saves, we didn’t make it as difficult as we would have liked but he certainly made some saves when he needed too,” Sidney Crosby, who finished the night with 21:03 of ice time to go with his 5 shots on goal and 52-percent face-off winning percentage said. “Give him credit he made a couple of good ones there, especially on that 5-on-3 like you said.”

The game got pretty physical at times, featuring two fights and 37 combined hits (though it seemed like the total should have been higher). The teams were up and down the ice exchanging chances, punches, hits and more throughout.

“I think both of our teams want to play fast and physical and they were probably better in that category [tonight],” said Crosby.  “I mean at times we were physical but consistently I don’t think that we were and our battles weren’t where they need to be, so that’s the difference sometimes in hockey games and unfortunately that wasn’t where it needs to be tonight.”

That physicality resulted in a few scary moments for both Crosby and Evgeni Malkin tonight, who each spent some time dealing with potential injuries during the game. Crosby’s came when he collided with Chris Kunitz during the third period. Each player labored to get off of the ice and looked to be in a good bit of pain.

“Just kind of went knee on… I don’t know what I hit my knee on, if it was his leg or…” said Crosby to the relief of many. “Yeah, just a bit of a stinger, but nothing major.”

Malkin’s occurred when Dan Paille lined him up for a big hit along the right wing boards during the third period. His facemask made contact with Malkin’s face, stunning him and knocking him to the ice. A scrum ensued, while Malkin lay on the ice to regain his composure. A cut was immediately visible on his upper lip. He left the ice for a period of time to have it tended too, but returned to action before the night was over.

Malkin finished the evening with 9 shots on goal and a hearty dose of frustration.

The Bruins got goals from Gregory Campbell, who opened the scoring when he chipped a puck past Marc Andre Fleury during the first period, Benoit Pouliot and Tyler Seguin who each scored off of the rush to put the Bruins up 3-0.

Overall, the Bruins were the better team this evening, but you get the impression that though they took this battle, the war is far from over… and it may not be until this spring during the Stanley Cup playoffs. Only time will tell…