The Penguins will hold their annual “rookie” developmental camp from July 12th through the 17th.

The Penguins will hold their annual “rookie” developmental camp from July 12th through the 17th. Rosters and additional details will be released later this week, but some of the top prospects in the organization will be in attendance including Eric Tangradi, Simon Despres, and this year’s first round draft pick Beau Bennett. Here is some additional info. 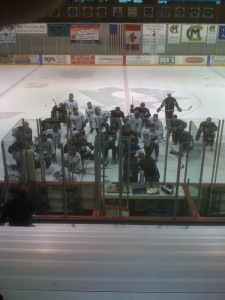 The group of rookies and prospects will be in Pittsburgh taking part in on-ice practice and scrimmage sessions at Southpointe, undergoing medical and fitness testing at the UPMC Sports Medicine Complex on the South Side and attending meetings and seminars at Mellon Arena.

Tangradi, 21, a former second-round draft pick of the Anaheim Ducks who was acquired with Chris Kunitz in February 2008, completed his first season in Wilkes-Barre/Scranton last year. The 6-foot-4, 221-pound left winger finished with 17 goals, 39 points and eight power-play goals in 65 games. The Philadelphia, Pa. native finished eighth in the Ontario Hockey League (OHL) with 88 points (38G-50A) in 55 games for Belleville in 2008-09. Tangradi added eight goals and 21 points in 16 playoff games for the Bulls.

Despres, 19, the 30th-overall selection in 2009 by Pittsburgh, completed his third season with Saint John of the Quebec Major Junior Hockey League (QMJHL) by setting career highs across the board in goals (9), assists (38), points (47), plus-minus rating (plus-26), power-play goals (4) and game-winning goals (4). He followed the regular-season campaign with an impressive postseason, recording 19 points (2G-17A) and a plus-14 rating in 21 contests.

Bennett, 18, who was the Penguins’ first-round pick (20th overall) in this year’s NHL Entry Draft, will attend his first Penguins development camp. Bennett, who will play at the University of Denver this season, led the British Columbia Hockey League (BCHL) in scoring with 120 points (41G-79A) in 56 games for the Penticton Vees. The Gardenia, California native, who is also the highest drafted California-born player in NHL history, chipped in five goals and 14 points in 15 playoff games.

A complete camp schedule and roster will be released later this week.