The Penguins arrived for training camp at the CONSOL Energy Center this morning and all were in great spirits. Here are my observations and scrum audio with 10 players and Dan Bylsma. 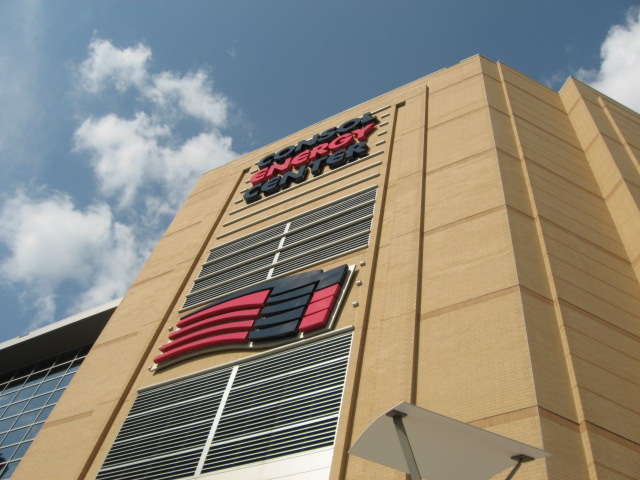 The Penguins gathered for the first time this morning over at Mellon Arena the CONSOL Energy Center (old habits die hard) for pre-camp medical and conditioning testing. They were also posing for their headshots and other pictures that will be used throughout the year in various ways.

It had been a month since I had last been through the building and the first thing I noticed was that they finished off the locker room with some inspirational words and action portraits of Penguins Hall of Famers and alumni around the upper lip of the room. All circle the room above the stalls and it seemed to inspire the group. Sidney Crosby even commented on the nod to team’s history as something that he really liked about “his” new locker room.

We didn’t have free reign to talk to everyone today, but the team did a nice job of filtering guys into the locker room, where we were stationed upon our arrival. Things took a little while to get going, as the players were going through their routines etc, but it allowed for a nice catch up session for the gathered media folk. Most of us hadn’t seem one another since the final home playoff game or the Penguins prospect camp back in July. Make no mistake… this is as much a “back-to-school” day for all of us as it is the players.

After catching up with the likes of Seth Rorabaugh (Emptynetters PG), Jeff Hathorn (93.7 the Fan), Avi (ESPN radio – don’t think I ever knew his last name), Rob Rossi (Tribune Review), Shelly Anderson (PG) and the Penguins Media Relations Group we got our first interviews of the year.The order was sort of interesting, but it did pick up.

The first lamb to the slaughter was Tyler Kennedy. TK was one of the only guys without a fresh hair cut and his hair was way curlier than I remember it being… thus the above lamb reference. It was very “fuzzy.” Anyway…no need to dwell on that… the biggest news that he had to share was that he has taken up Yoga, that said Yoga was way tougher than he expected it to be, and that he isn’t planning on incorporating any of it into his goal celebrations.

Kennedy has also been serving as a bit of a support mechanism for Jordan Staal. The two are very good friends and spend a good bit of time together off of the ice.  Apparently Staal has been a great support to Kennedy during some of his past injuries and he is trying to, in his words “return the favor.” Kennedy also referred to Staal as “one of the most professional guys on the team.” A great compliment to one of the Penguins’ youngest guys.

Then it was Eric Godard’s turn. Unfortunately, most of us didn’t have much to ask the big guy, but I did provide a moment of comic relief in his scrum when I asked him about his role… first of all it is fairly well designated coming into camp, but I was curious if there were any other goals that he focuses on coming into training camp… his answer: “I am going to score 50 goals…” When I started laughing along with the group, he hit me with a “why are you laughing? What’s so funny about that…” He went on to discuss the fact that he hoped to get in the line-up more often and to play more minutes when he does so…

Brent Johnson was up next and at this point many of us were thinking that we were on candid camera or something… not that we weren’t willing to chat with the selected individuals, it just seemed add that we were getting a crack at any of the new guys. That would soon change, but not before “Johnny” shared a bombshell. He let slip that Jordan Staal had actually been through 5 different surgical procedures on his infected, surgically repaired foot. Though the number of procedures had been speculated, this was the most definitive news on the situation. Johnson also expects to play 20-25 games this season.

Following our scrum with Brent Johnson we were given a crack at one of the new guys… Mike Comrie. He didn’t give us much information, but was very complimentary of the line-up, the system and Dan Bylsma. He mentioned that the new arena, the fact that this is such a great sports town and his possible teammates all played a role in choosing Pittsburgh… for less money. Also mentioned that Pittsburgh is definitely a team that “he wanted to play for” and that it is looked at as a destination.The last quote is the best: “this is a place that I wanted to play and a team that I wanted to be a part of.”

“Big Dog” Tangradi, Ben Lovejoy and Dustin Jeffrey were next into the room, but most were anxious for the fourth player through the door, Evgeni Malkin. Yes it is true…he is sporting 1980’s style “razor stripes” on the sides of his head and he looked excited for the season. Shelly Anderson and Rob Rossi led the scrum, as is usually the case with Geno… they have spent the most time developing a rapport with him and he is most comfortable talking with them. You will hear some of the specifics of his scrum in the audio, but one of the best quotes from Geno Machino came in answering this question from Rossi… what is a good season for Evgeni Malkin?

“A good season for me is if we win the Stanley Cup,” said Malkin.

I thought that was very telling about the man that “71” has become. He didn’t let that question turn into a talk about his personal accomplishments, but made it about team.

Speaking of “team,” I thought it was interesting that more than one guy referred to this group as their family… not that that vibe wasn’t prevalent before, but it seems that they are really taking an all for one and one for all mentality this year.

Interestingly enough, Arron Asham was one of the guys who referred to the Penguins and this group of guys as “my family now.” He also made light of the fact that he and Matt Cooke will have no problems playing together on the same team, as everything, “even him biting me” was in the past. Asham was disappointed about coming up short last season and that when he was looking at a destination for this year he decided that “I want to win the Stanley Cup and Pittsburgh gave me the best chance to do that.” He feels that he Bylsma’s system suits his style and that he will succeed playing it in. He also mentioned that he was surprised that it wasn’t the Penguins that faced the Flyers in last season’s Eastern Conference Final.

I didn’t get much from Max Talbot, but the “Superstar” did talk about the fact that there is no ill-will in bringing in guys like Asham or Comrie. “The NHL is a big family” and that it is all business… these guys are family now even though “it was always tough playing against Ash… and I think I and TK fought Comrie a couple years ago…”

Kris Letang seemed a bit intimidated by the group that was waiting for him when he walked into the room, but he gave us a pretty honest assessment of his own play and that of his team. Letang realizes that he has got to be more consistent “like in the playoffs…” and that losing some of the veterans on the blue line could have been a good thing for himself and guys like Goligoski, as they will now be in a position of being the “older” guys…

Sidney Crosby was next up… it was nice to hear him talking about recharging the batteries a bit with a lot of time at home and a lot of fishing. He said that he also worked hard on his off the ice conditioning this year and is ready for the season to kick off. He also seemed a little sad about the demolition of Mellon Arena, but mentioned that the new building is already starting to feel “homey.”

Last but not least from the player’s ranks we got Matt Cooke, who mentioned that he and Asham “hugged it out” on the golf course yesterday and that all ill will between any of the new faces and the old ones is a thing of the past. His interview was a lot of the same kind of things that we had heard from him at the end of last year, but he did go out of his way to specify that though their is a bit of a bad taste left from losing to Montreal, there is a very positive vibe around this team. “Emptynetters” made a point to ask him about the new headshot rules that have been implemented and I can’t say that I am surprised. Seth was one of the biggest critics of Cooke last season following the Savard situation and he got some great reaction from him on the topic.

Then closing out the day was coach Dan Bylsma. Though Bylsma talked for upwards of 10 minutes, the most important info came in the form of brief updates on Jordan Staal, Alex Grant and the fact that he and Penguins management had long discussed Asham and Comrie. “Those signings might have seemed late to you guys, but we had identified those two as guys that we thought could fit into our situation.”

Overall, it was a great first day back. It was disappointing that we didn’t get a chance at Paul Martin, Zbynek Michalek, Brooks Orpik or Marc Andre Fleury, but that is what the next couple of days will be used for. The group seems excited to get this train rolling out of the station and most of us are with them on that notion. Generally speaking the vibe was very positive, very upbeat and not to get too far ahead of myself, but it could be a special year…