The Penguins limp into battle with the Toronto Maple Leafs tonight at 7:30pm. Brooks Orpik and Zbynek Michalek will be out of the line-up for the Penguins… 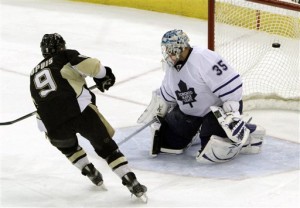 There is never a good time of year to watch your team suffer a number of injuries, however if a team were going to go through it, now is as good a time as any. It is always better to see injuries stack up earlier in the season while there is still plenty of time to make up games and jockey for playoff positioning.

The Penguins, who entered the season with some lofty goals, suddenly find themselves dealing with the loss of a number of significant players. We all knew about Jordan Staal, as the talented center was on the injured list entering training camp. What the team didn’t bank on was losing two prominent members of their retooled blue line as they did this past weekend.

Brook Orpik pulled up lame in practice on Sunday as he apparently tweaked a groin and it caused him to miss Monday afternoon’s tilt with the New Jersey Devils. Then Zbynek Michalek left that game in New Jersey after taking an awkward check from the Devils’ Rod Pelley. Both are out of the line-up for the Penguins this evening as the team meets the Toronto Maple Leafs.

Of the two, Orpik seems to have the less worrisome injury as head coach Dan Bylsma confirmed that it was merely a groin strain this morning in his post practice comments. Michalek’s injury has yet to be categorized and Bylsma wouldn’t speculate on the severity of it. We did learn that Michalek will be seeing a physician this afternoon and a better diagnosis could be available tomorrow morning.

Our pal Rob Rossi speculated that the injury could be a long term one in his afternoon blog posting. Though that isn’t confirmed, the team has been just tight lipped enough to cause some concern.

While those Birds convalesce, the Penguins will be using their 5th, 6th, and 7th defensemen in a much more prominent role. As reported last night, the team has recalled Andrew Hutchinson from their Wilkes Barre-Scranton affiliate to join Ben Lovejoy and Deryk Engelland on the new look blue line. All three are capable players, but losing you top shut down duo is a tough pill to swallow.

Along with the injuries, the Penguins have also done a bit of juggling with the line-up and it looks as if Mike Comrie could be the odd man out. There is no word on if he has suffered some sort of injury of his own or if he has just been demoted, but he didn’t skate with any line this morning and Bylsma categorized him as a game time decision.

Enter the Toronto Maple Leafs, who have roared out to a 2-0-0 start and have looked much better entering this regular season than they have in quite awhile. The Leafs have been very aggressive on offense and that could be troublesome to the Penguins MASH unit defense.

It is also going to be interesting to see how the Penguins counteract the likes of Phil Kessel on the power play. Both Orpik and Michalek have been mainstays on the penalty kill during the early moments of this season. If the replacements are concerned, they aren’t letting on.

“No matter who is in the lineup we have a good mix of guys up here and at Wilkes-Barre-Scranton,” Deryk Engelland told PensTV. “We both use the same system so I think anybody can step in and go from there.”

Will the momentum generated during Monday’s victory carry over into this evening pushing the team to its first home victory? That remains to be seen, however this team, namely its stars such as Sidney Crosby and Evgeni Malkin, have shined against the Leafs in the past. The duo combined for 13 points (1 goal-12A) in 7 combined games last season.

Marc Andre Fleury is expected to be in net for the penguins while the Leafs will trot out the “Monster” Jonus Gustavsson. The two teams will face off at 7:30 pm at the CONSOL Energy Center. I will also be live in the house bringing you all of the action. Please join me in the blog/comments section…

Jordan Staal surprised the gathered masses for the second time in three days this morning as he traded his walking boot for skates. The Penguins injured center spent some time skating with strength and conditioning coach Mike Kadar. There is still no definitive word on when Staal will be healthy enough to return, though seeing him on skates is a great sign.

Former Penguins forward Bill Guerin was in the house for practice, though it was just a social visit. He came through to visit with friends and to get a look at the CONSOL Energy Center in action and to (according to Rob Rossi) “tie up some loose ends.”

The Penguins and Aramark have teamed up to donate all unused prepared food to the Great Pittsburgh Food Bank as part of the NHL’s “Rock and Wrap it Up” Program.

More than 350 pounds of food was donated following the Penguins’ regular-season opener on Oct. 7 and more than 800 pounds was donated after the Oct. 9 game.

“It’s another way to give back to our community and do our part in the battle against hunger,” said David Morehouse, CEO and president of the Penguins. “It is an honor for the Penguins and our partners at ARAMARK to participate in this tremendous program.”