The Penguins line-up will have a distinctly Wilkes Barre-Scranton feel to it this evening when the Pens face-off against the Kings. 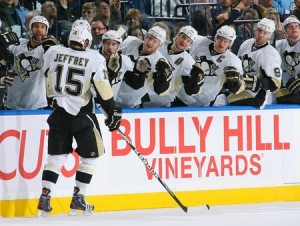 The Penguins took the ice at the CONSOL Energy Center this morning and the line-up had a decidedly Wilkes Barre-Scranton feel to it.

Chris Conner, Dustin Jeffrey, Joe Vitale, Nick Johnson, Ryan Craig and Brett Sterling all started the season with WBS and look to be penciled into the line-up this evening. Conner skated on a second line with Max Talbot and Mike Rupp, while Vitale centered Craig Adams and Ryan Craig on the third line.

The fourth line saw Dustin Jeffrey centering Brett Sterling and Nick Johnson/Eric Godard. The later duo switched of. My guess is that Johnson will get the call in that spot.

Chris Kunitz and Arron Asham were both absent from the skate and neither is expected to be available to the team this evening.

Sidney Crosby is back in town after a get away with his family to a “warm weather” locale. The Penguins’ captain spoke with reporters at the CEC this morning. Here is a quick run down of what he discussed thanks to Sam Kasan over at the Penguins official site:

Unfortunately I missed Crosby in person due to day job constraints. I will be in attendance at the CONSOL Energy Center this evening bringing you all of the action. It will be very interesting to see how this rag tag line-up performs.

It is worth noting that players tend to have a spark of adrenaline upon being recalled and play their best hockey shortly after their recalls. The group of players that has been recalled are all what could be considered bubble players and are hungry for NHL roster spots be it here or somewhere else around the league. Look for them all to take advantage of the opportunity to open Ray Shero’s and other eyes around the league.