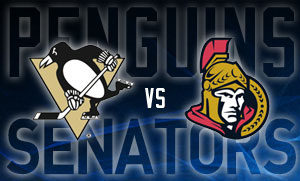 The Penguins arrived in Ottawa yesterday afternoon and hit the ice this morning to get prepared for this evening’s game. Many around the team have compared this series to that in last year’s first round against the Philadelphia Flyers. Who can argue with the comparison, as the series has taken an eerily similar path to this point… especially when you consider the fact that the Penguins had a chance to close it out on home ice in game five and let that chance slip away.

One thing that makes this year different is that fact that they were handily beaten by the Flyers on home ice during last April’s game five, while they dominated the Senators for most of this past Thursday’s contest. That domination has most around the Penguins feeling pretty confident in their ability to close this series out tonight at Scotiabank Place.

That isn’t to say that the Penguins are feeling cocky, so much as to say that when they are playing their best hockey, they feel that they can compete with anyone in the league. The fact that they have been especially effective at clinching series on the road doesn’t hurt either.

“That is tough to say, what makes a team a good road team,” defenseman Mark Eaton said. “I think when we are playing our best hockey it is simple hockey, it’s getting pucks deep and getting a good forecheck. Sometimes that is “ugly” or not pretty hockey but sometimes that is a lot easier to do on the road than it is at home.

“I don’t know if you get a mentality at home where you want to play a prettier game and you want to have tic-tac-toe plays but that is not our game. We are comfortable on the road and we have played pretty well on the road.”

The Penguins have been an effective road team all season long and have already won two games in this series in Ottawa.

There will not be many changes to report this evening, as the line-up that took the ice on Thursday was pretty effective. One change that is being considered is that of getting Chris Conner into the line-up. Conner was recalled yesterday from Wilkes Barre-Scranton, the Penguins AHL affiliate, and he practiced with the team today. It is assumed that he would replace Ruslan Fedotenko if he is inserted into the line-up. Dan Bylsma was particularly coy about whether he would use Conner during his comments this afternoon.

“We are going to go game-time on our lineup, but he will be out there for warm ups.”

My feeling is that he will go, as he practiced with Jordan Staal and Matt Cooke this morning. Conner filled in the spot usually filled by Tyler Kennedy. Kennedy again missed practice and will not play tonight.

The Senators have got to be skating with some confidence, especially after taking Thursday’s epic three overtime affair…at least one Penguin isn’t worried about a carry over.

“I am a believer in that game – the game that is happening right now,” said Bill Guerin. “It doesn’t matter when you win or lose, it’s what happens during that game.”

I still think that tonight is as close to a must win situation as you can get while leading a series 3-2. No one wants to get to a game seven situation against a desperate team…one hot goaltending performance or bad bounce could send you packing. Something tells me that that alone will motivate the Penguins to get things done tonight…