The Penguins watched as Sergei Gonchar rode off into the sunset this afternoon and signed a 3-year deal with the Ottawa Senators. 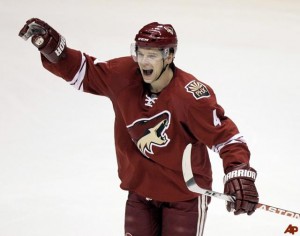 The Penguins watched as Sergei Gonchar rode off into the sunset this afternoon and signed a 3-year deal with the Ottawa Senators. Tough to believe that the third year was important enough to Gonchar that he was willing to walk away, but it was.

Ray Shero was unfazed by the situation and immediately got to work on trying to sign Dan Hamhuis, Zbynek Michalek, or Paul Martin. He battled hard and seemed to be in a couple of bidding wars but came away with two of the top remaining d-men.

Shero inked Michalek to a 5 year $4 mil dollar deal… then finished off a deal with Paul Martin. Martin’s deal is a 5 year, $5 mil.

Here is the official release on Michalek… didn’t receive one of Martin as of yet.

The contract runs through the 2014-15 season, and has an average annual value of $4 million dollars over the term of the contract.

The Jindrichuv Hradec, Czech Republic native represented his country in the 2010 Winter Olympic Games in Vancouver. Michalek also played for the Czech Republic at the World Championships in 2006, 2007 and 2008. He scored three goals in nine games in 2006 to help his country earn a silver medal.

Michalek, who broke into the NHL with Minnesota in 2003-04, won the American Hockey League’s Calder Cup Championship with the Wild’s top-affiliate the Houston Aeros in 2003.

Ray Shero will be available to the media at 5:00pm. I am hoping to make it into downtown fast enough to attend… more soon…