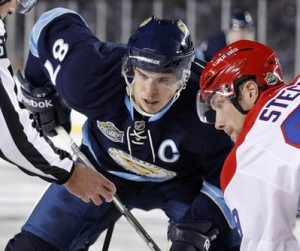 The Penguins officially made the announcement that we all knew was coming — Sidney Crosby will not attend the All-Star Game and its surrounding festivities this coming weekend. Though he is improving, they think it best to keep him home to continue his recuperation.

This is the best decision, as he hasn’t been on skates for two weeks and you never know how a concussion is going to be effected by travel. Ray Shero stated that he has been in contact with Brendan Shanahan to inform him of the team’s decision.

Here is the official release…

Sidney Crosby will not attend NHL All-Star Weekend festivities in Raleigh Jan. 28-30 while he continues to recover from a concussion, the Pittsburgh Penguins announced today.

“Sidney is making progress in his recovery but still is not completely symptom-free,” General Manager Ray Shero said in making the announcement. “The Penguins organization has decided that he will not attend the NHL All-Star Weekend and instead will continue to relax and recuperate in the hopes of returning to our lineup soon.”

Crosby will miss his ninth straight game Tuesday when the Penguins host the New York Islanders at CONSOL Energy Center. He has not been cleared to resume physical activity.

“I know Sidney is very honored to have been selected by the fans to appear in the All-Star Game, and he was happy to attend the festivities two years ago when he couldn’t play because of a knee injury,” Shero said. “However, in this situation – when he has not even skated for two and a half weeks and still has not been cleared to resume physical activity – we think it’s best for him to focus totally on his recovery.

“I spoke with Brendan Shanahan of the NHL office and informed him of our decision. Brendan was very understanding and offered Sidney his best wishes for a quick return to the lineup.”