The Penguins and Leafs came together at this year’s NHL trade deadline to swap a couple of wingers. One would help the Leafs rebuild, while the other would help the Penguins compete for back to back Stanley Cup Championships. 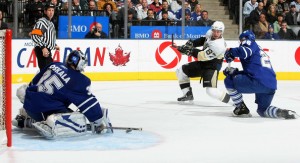 The Pittsburgh Penguins and Toronto Maple Leafs came together at this year’s NHL trade deadline to swap a couple of wingers. One would help the Leafs rebuild, while the other would help the Penguins compete for back to back Stanley Cup Championships.

Thus far the deal has been one that has worked out for both sides. The Penguins have gotten 8 points (2G-6A) from Alexei Ponikarovsky over eleven games, while the Leafs have gotten a glimpse of what Caputi brings in the form of 6 points (1G-5A) in twelve games. Both players have played a hand in their new team’s successes since arriving earlier this month.

The duo will face each other for the first time this afternoon since the swap and it emotions could be running high.

Though it will be tough to be on the opposite side for the first time, Ponikarovsky is fired up for the chance to get back to the Stanley Cup Playoffs with his new team.

“I’m still excited, playing on a team that’s the defending Stanley Cup champion,” Poni said. “That says a lot. You have to get focused on your game, play relentless hockey. It’s been a long time since I was in the playoffs and I can’t wait for it.”

Luca Caputi is also excited, not about the playoffs, but about showing his former team what he is capable of. Caputi has been getting big time minutes and playing in all situations for the Maple Leafs since arriving in Toronto.

“It (Sunday) is something that’s been in the back of my mind the past couple of days,” Caputi said to the Toronto Sun. “It will be emotional, but I just want to get the two points and play my game, play hard and create energy.

“If you look at the game sheet (from Thursday’s game against Atlanta), I played almost 17 minutes, which is something I didn’t come close to in Pittsburgh. There is so much depth there, it’s almost impossible to crack that roster unless they run into salary cap issues next summer. But I’m glad I’m here and glad I’m getting the opportunity. I really want this deal to work out for the Leafs, to hone my game so they can’t send me down.”

Emotions aside, there are still two big points on the line for the Penguins this afternoon and they will not come easily. The Leafs have been hot as of late and though they aren’t in the Eastern Conference playoff hunt, they have been relishing the role of spoiler.

The Leafs have posted an impressive 8-2-0 record over their last 10 games which includes victories over Ottawa, New Jersey, Montreal and Atlanta…all of which are in or in the hunt for the playoffs.

The Penguins on the other hand have been a bit inconsistent lately, but have still gathered points in seven of their last ten games.

The goaltending match-up is expected to be Marc Andre Fleury for the Penguins and JS Giguere for the Leafs. No official word on Evgeni Malkin or Sergei Gonchar, but I would expect both to again miss this afternoon’s game.

Max Talbot will play in his 300th career game this afternoon.

The Penguins boast a 43-25-7 record for 93 points and have officially clinched a playoff spot. Last season, Pittsburgh did not secure a berth in the postseason until April 7 in a 6-4 win at Tampa Bay, the third to last game of the year.

The Penguins special teams have been strong of late. The Penguins penalty killing units have killed off 38 of their last 40 times shorthanded (95.0 percent), including their last 30 straight, and haven’t surrendered a goal in their last eight games. This is the best run of penalty killing for the Penguins since they didn’t allow a power-play goal in nine consecutive games (March 29 to April 16, 1998), while killing 43 straight. The power play has scored a goal in 10 of the last 15 games, going 11 for 50 (22.0 percent), and the team scored two goals in that stretch just as a power play expired.

Tomas Kaberle leads all Toronto players in career goals (6), assists (18) and points (24) in 38 games against Pittsburgh.

The Maple Leafs have a record of 5-10-1 in the second half of back to back games this season.