A collection of news and notes for 03/17/11 including an update on Sidney Crosby and other wounded Penguins. 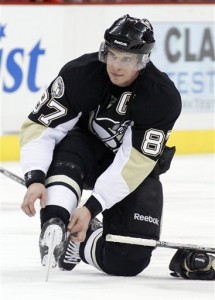 Happy St. Patrick’s Day everyone! I am sure that most of you are already celebrating, already watching college basketball or getting ready to do both when you escape the dreaded ball and chain that is the work day. I know that I am anxious to check out some of the b-ball action when I get freed up, but in the meantime I wanted to hit you all with some news and notes for today…

The big news of the day is that Sidney Crosby has skated for the third time in four days and didn’t have any setbacks. It is exciting just knowing that he is back on the ice, albeit in 15-minute intervals. Crosby has reported no setbacks and admitted that he doesn’t have a set schedule for when he will be skating moving forward. He is just following the directions of the training staff and doctors. He also shared that he doesn’t have a plan for ramping up his workouts and he is leaving that up to the experts.

That’s not really up to me. I give doctors feedback and they tell me what I should expect and their plan and how I should feel. There’s a lot of communicating to be honest. Everybody’s different. The important thing is that they know how you feel and as long as they know that they’ll guide you in the right direction. We’ve been able to work pretty effectively with that. – Crosby today following his skate – credit penguins.nhl.com

One thing that has been annoying me this week is the fact that most talking heads in town have talked of just shutting Sid down for the year regardless of if he ever gets medically cleared to resume playing. These “experts” feel that anytime that he would try to comeback this season would be too soon and that he would be setting himself up for another concussion. Well, that is true…he would be risking another concussion. As would the other 20 guys he skates with on a day to day basis… ask yourself, how much time is enough time? Would you all feel the same when training camp rolls around next September? Maybe he should sit out until next year’s All Star break? The bottom line is that if he is medically cleared at some point to resume full hockey activities, he should do so. It is what he does…

I realize that many are afraid of the fact that Sid could be setting himself up for multiple concussions a la Eric Lindros or Pat Lafontaine, but that is not a given. Sure, he could be a guy that ends up having concussions moving forward, but he could also a guy who never suffers another.

It is worth noting that Evgeni Malkin suffered a concussion during the Russian Super League season prior to his draft year. Depending on where you got the info (it was pretty spotty coming out of Russia at the time) it was either mild or pretty severe. The bottom line is that Geno missed two months of that season due to the injury. It was a scary situation for a highly touted draft prospect and it scared many scouts who had him rated as a top five prospect at the time. Geno dealt with his symptoms and returned late that season to captain his Russian National team to a gold medal at the under-18 World Championships…sound familiar? It is also worth noting that Malkin has never suffered another concussion… even after taking big pops from guys like Alex Ovechkin, Brendan Witt etc.

Crosby isn’t the only wounded Bird on the comeback trail, as Mike Comrie and Arron Asham practiced in full with the team today. Comrie and Asham skated on a line with Eric Godard for drills etc. Matt Niskanen also rejoined the team this morning and seems to be over the sickness that had kept him out of the line-up for the past two games.

One interesting note was that Mark Letestu (RANGO!) wasn’t on the ice with the team. 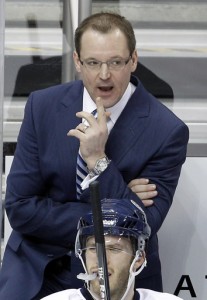 Dan Bylsma shared a veritable cornucopia of updates regarding the team’s injuries during his post practice scrum.

On Asham and Comrie:

“(Arron) Asham again in practice today with the full team. (Mike) Comrie was out there with us, it was his first practice. They’re both working on their conditioning and timing and getting back with the group, but they’re out there with us.”

On Nick Johnson and Eric Tangradi:

“Nick Johnson and Eric Tangradi continue to progress off the ice, skating with Brooks Orpik. But they’re probably a ways away in their progression to getting back with the team.”

Bylsma also mentioned that if all goes according to plan, Brooks Orpik could join them back at practice as soon as next Wednesday. It will depend on how his hand is healing up, but that would mark the four week point.

On the aforementioned Geno Malkin:

He shared some thoughts and the team’s mindset on Sidney Crosby:

“And Crosby, to follow up what Sid addressed today, just progressing slowly, following instructions from the doctors and he’s in contact with them about how he’s feeling and his progression. If he skates, or if he doesn’t skate, or what he does off the ice, is based on the doctors’ protocol and following that program. It doesn’t mean necessarily that he’s having a good day or a bad day. But he is progressing back, there is no timetable for his return. And as far as us, he’s really not on the radar whether we’re discussing whether he is going to return to play or not. It is really not on the radar yet. So there’s no timetable, and good to see him on the ice and good to see him progressing. But he’s following that protocol closely.”

Late in the Ottawa game Dustin Jeffrey logged some time on the Penguins top line between James Neal and Alex Kovalev and Bylsma said that would continue if Mark Letestu is unable to play come Sunday.

Following their workout this morning at Southpointe, the team spent some time running through team building drills with JB Spisso – something that they have done for the last few years. According to Bylsma, Spisso stays in touch with the he and the players throughout the season via text messages etc.

Bylsma also had the line of the day when asked what JB’s full name is:

The Penguins might not play until Sunday afternoon, but they will be in action this evening at their annual Skates and Plates dinner at the CONSOL Energy Center. The event benefits the Pittsburgh Penguins Foundation, the Western PA Chapter of the Cystic Fibrosis Foundation and the Mario Lemieux Foundation.

Since 1986, the team’s annual benefit dinner has raised over $5 million for Pittsburgh area charities with an emphasis on medical research.

The event features Penguins players serving as waiters for the evening.  Player introductions are scheduled for 7:30 pm on the floor of CONSOL Energy Center.

Have a great St. Patrick’s Day everyone! Be safe out there tonight… don’t drink and drive! Here are a couple tunes to get you in the mood and to play us out…