It was certainly an interesting couple of days in and around the Pittsburgh Penguins. First of all, two rivals added big pieces that will definitely have an impact on the the Penguins during the upcoming season

It was certainly an interesting couple of days in and around the Pittsburgh Penguins. First of all, two rivals added big pieces that will definitely have an impact on the the Penguins during the upcoming season. 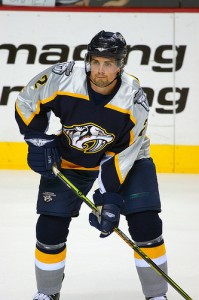 First the Flyers picked up the negotiating rights to Dan Hamhuis from the Nashville Predators, which will be a big boost to the Flyers blue line. The blue line as currently constituted was good enough to get the team to the Stanley Cup Final and came within two victories of winning the entire thing. Adding Hamhuis will alleviate some of the pressure that was heaped on the shoulders of Chris Pronger. The Flyers traded Ryan Parent to finalize the trade, which seems like the seventh or eighth time that Parent has been shipped between these two teams.

The second move came in the form of the Devils reacquiring Jason Arnott from the Predators. Arnott had some fine years in New Jersey and was pretty excited about the opportunity to head back to his former team. He should be a nice addition to a team that had a shortage of centers…at least in my humble opinion.

Though each team still has tweaks to make, they have taken strides to make themselves better than they were this past season. It will be interesting to see how those moves alter the landscape of the Atlantic Division.

The Penguins made a signing of their own this afternoon, as they got Ben Lovejoy locked up for 3 years. The interesting thing about the signing is that they were able to get Lovejoy secured on a two way deal, which gives them flexibility if he doesn’t wow Ray Shero during training camp. Some have asked why Lovejoy would agree to such a deal, especially when the money was around the league minimum? Well it comes down to one factor, Lovejoy is on the wrong side of 25 and has yet to establish himself as a regular in the National Hockey League… a situation like that sort of pushes a player to take the security of the longer term. He is now guaranteed a pay check for three years and gave himself a chance to establish himself.

Lovejoy has shown that he does have the skills to play in the league and this is as good a year as any for him to step up and take one of the jobs in the top six. Especially based on the vacancies that the Penguins are going to have.

Speaking of vacancies on the Penguins blue line, they are sure to have several. Especially based on the fact that conversations with Sergei Gonchar have apparently made little progress, Jordan Leopold and Mark Eaton are still hanging in limbo and Jay Mckee is apparently going to shop for a top six role. I will have more on Eaton, Leopold and Mckee soon, but I wanted to focus on Gonchar tonight.

I realize that Darren Dreger has talked about the possibility of trading Gonchar’s rights if they do not make significant progress over the next week, but I am just not sure that will happen. First of all, Gonchar does have a no trade clause. Second of all, he has made it known on numerous occasions that he would like to stay in town. I just have a feeling that these two sides are going to find a way to work this situation out. I know that the money is going to be a tough fit, but at the same time Gonchar is in a great spot. He was again a top ten scorer from the blue line, even after only playing in 60 plus games. He is still one of the best power play QBs in the league, but that fact is helped by the supporting cast that he has on a nightly basis. It is also worth noting that he has been a vital piece of the championship puzzle here in town. He is one of the leaders on and off of the ice and he is probably the fourth or fifth most important player on the team behind the big three centers and Marc-Andre Fleury.

It is just a gut feeling, but I still believe that Gonchar will be here next year… we shall see…

The Penguins have also been making progress in their talks with Matt Cooke. It is no secret that both sides want to get a deal done, it is just a matter of getting the years and money in order. Don’t be surprised if you see some sort of announcement on Cooke sooner, rather than later. In a perfect world Shero will be able to get a handful of his players locked up before July 1st…Sarge included. One these players hit that date, everything changes and nothing is as it seems.

Stay tuned for more soon… I will be traveling a bit this week, but the team and I will have fresh content here for you throughout…