Since Mario Lemieux took over the team back in 1999 the Penguins have done a ton of work to make their fans and season ticket holders feel special. 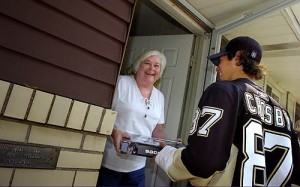 All of that hard work fostering and growing the fan base has been recognized by ESPN the Magazine, as the Penguins have ranked number 1 in fan relations. Here is the release from the team…

PENGUINS RANKED NO. 1 IN FAN RELATIONS

IN ALL OF PROFESSIONAL SPORTS

The Pittsburgh Penguins are ranked No. 1 in Fan Relations in all of professional sports, according to the 2010 “Ultimate Standings” compiled by ESPN The Magazine.

The publication rates all 122 teams in the NFL, NBA, NHL and MLB in eight different categories – Fan Relations, Bang for the Buck, Ownership, Affordability, Stadium Experience, Players, Coaching and Title Track. The standings were assembled via research and fan feedback.

ESPN describes the Fan Relations category as “Openness and consideration toward fans by players, coaches and management.”

In the overall “Ultimate Standings,” the Penguins are ranked No. 1 in the NHL and No. 5 among all 122 teams in the four leagues.

“It’s gratifying to be honored in this way, especially because the fans are the most important part of the Penguins organization, and outstanding fan relations is what we strive for,” team president David Morehouse said. “This is a tribute to the type of people we have working here, from the players and coaches to the people who answer the phones, sell the tickets and show you to your seats. And we’ve said all along we have the greatest fans in professional sports.”

In addition to ranking No. 1 in Fan Relations, the Penguins also were No. 3 in Ownership, No. 3 in Title Track and No. 5 in Players.

The Pens’ lowest ranking was in Stadium Experience (69th), but that is due in large part to having played in the oldest arena in the NHL. Next season, the Penguins will move into the new, state-of-the-art CONSOL Energy Center.