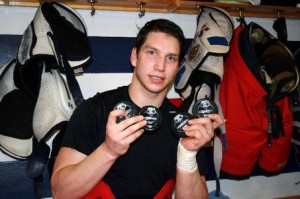 I have been asked on several occasions over the past couple of weeks who would be the next call-up on the Penguins’ blue-line if the team needed to fill a slot — my answer? Alex Picard.

So it was written, so it shall (and has) come to pass… quoth the Metzer… well you get it!

Alex Picard was called up this morning, presumably to fill in for Kris Letang if he is unable to go tonight with what has been called an undisclosed injury.

Picard has appeared in nine games for Wilkes Barre-Scranton and has posted 3 assists and a plus-7 rating, which is tied for 10th in the American League.

The 6-foot-2, 220 pound defenseman played his junior hockey in Halifax before skating as Marc Andre Fleury’s teammate back in Cape Breton during the 2003-04 season. Picard, a 2003 3rd round draft pick of the Philadelphia Flyers, has appeared in 236 career regular-season games for the Philadelphia Flyers, Tampa Bay Lightning, Ottawa Senators, Carolina Hurricanes and Canadiens. During that time the Gatineau, QC native has collected 19 goals, 46 assists and 65 points.