The Penguins have recalled forward Chris Conner from their Wilkes Barre-Scranton AHL affiliate. 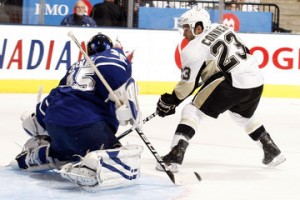 The Penguins have recalled forward Chris Conner from their Wilkes Barre-Scranton AHL affiliate this morning. I am not as of yet sure if it is due to the fact that Evgeni Malkin exited Monday’s practice early with what Bylsma called “discomfort,” but we will soon find out.

The Pittsburgh Penguins have recalled forward Chris Conner from Wilkes-Barre/Scranton of the American Hockey League, it was announced today by executive vice president and general manager Ray Shero.

Conner, 26, is tied for second on the team in scoring with nine points (3G-6A), helping WBS to an East Division leading 10-1 record for 20 points.

Conner, who has played 79 career NHL games, originally signed with the Penguins organization prior to the 2009-10 season. In that campaign, he appeared in eight games – and one postseason contest – with Pittsburgh, totaling two goals and three points.

The Westland, Mich. native played four seasons with Michigan Tech, recording 69 goals and 129 points in 151 games. Conner, who was named to the 2004 Western Collegiate Hockey Association Second All-Star Team, finished his career as the school’s leader in shorthanded goals (15) and ranks 19th among goal scorers (69).