The famous “Student Rush” promotion has given way to a once in a lifetime chance to take part on the “Student Flush” at the new Consol Energy Center. 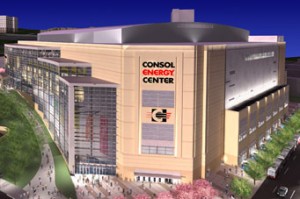 The Penguins have become famous for their “Student Rush” program in which they offer students the chance to get the best seat in the house for $20 dollars starting one hour before the game. That famous promotion has given way to a once in a lifetime chance to take part on the “Student Flush” at the new Consol Energy Center.

Part of building any new stadium is the final test of the plumbing system in the building, according to some pro plumbers at PIC Plumbing Services. The crew has to do one major flush of all of the toilets in the building at one time to ensure that the water pumps can handle the flow. Enter the “Student Flush” night!

The Penguins, who are constantly thinking of new ways to get their fan base involved and invested in the franchise figured that they would take this chance to have some fun.

“I don’t know that anyone has ever done a promotion around the required simultaneous flushing of the toilets in a new facility, but we thought we could have some fun with it,” said David Morehouse, president of the Penguins. “Students make up such a large part of our fan base that we thought we’d offer them a chance to participate and help us out. People probably don’t even know that this is a requirement, but you have to do it once in every new arena.”

The Penguins will hold the event Thursday, June 10 at 4 p.m. and it will be presented on behalf of the Penguins by PJ Dick Hunt and McKamish.

Penguins Student Rush Text Alert members will be notified this week and asked to enter for a chance to participate. 125 students will be randomly selected from all entrants and invited to bring a friend.

Overall, 400 “flushers” will take part, including representatives of PJ Dick Hunt and McKamish, who are involved in the construction of the new arena.

Participants will be assigned to one of 32 groups upon registering. Each will receive a free t-shirt featuring the Student Flush logo on the front and a current or former Penguins player’s name and number on the back.

Pizza Hut pizza and Dr. Pepper Snapple Group beverages will be provided for participants following the event on the floor of CONSOL Energy Center.

Penguins broadcaster Phil Bourque will serve as MC and Iceburgh will be on hand to entertain the crowd.