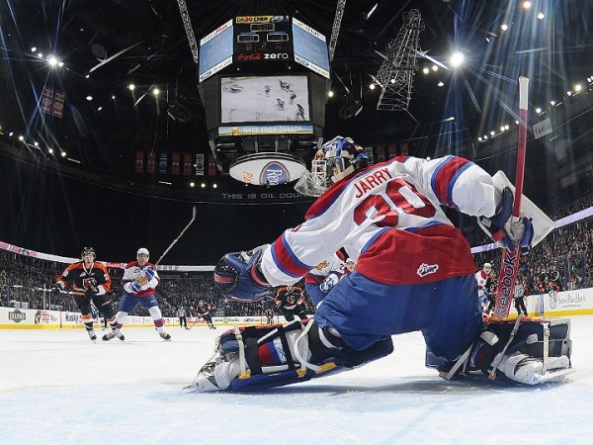 The Penguins drafted a goaltender higher than the third round for the first time since 2003.

The Penguins hadn’t drafted a goaltender before the third round since 2003 when they traded for and used the first overall draft pick to select Marc-Andre Fleury. That all changed on Sunday when they again swung a trade to move up in the draft to select Edmonton Oil Kings goaltender Tristan Jarry in the second round, number 44 overall.

Earlier Sunday, the Penguins sent Tyler Kennedy to the San Jose Sharks in exchange for a second round draft pick, number 50 overall. They then shipped the second round pick, along with a third rounder to the Columbus Blue Jackets to move up to number 44 where they were able to grab Jarry.

“We really liked this goaltender, Jarry, from the Western Hockey league,” Ray Shero said. “Our guys had him rated very high and so it’s the direction that we wanted to go.”

Jarry was the International Scouting Service’s second rated goaltender behind Zach Furcale, who went to the Montreal Canadiens earlier in the second round. 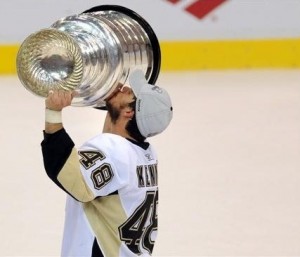 The 6-foot-1, 178 lb Jarry spent last season playing behind one of the better goaltenders in the Western Hockey League, but still managed to put up spectacular numbers. He finished the season with an 18-7 record, 1.61 goals-against-average and a .936 save percentage in 27 appearances. He also tied for second in the WHL with six shutouts.

“We see a potential starting goalie,” the Penguins’ director of amateur scouting Randy Sexton said. “He’s got very good size and he moves well. He didn’t get a lot of ice time this year because he was playing behind a Calgary draft pick in Edmonton, but he will be a starter next year and he’s got the technical foundation and the size to be a starter.”

Though adding a goaltender like Jarry to the organization is exciting for all involved, it is a bit bittersweet to see a long-time Penguin move on. However, the San Jose Sharks will provide Tyler Kennedy with a chance to get a fresh start in a new environment. The “ole boy”, as teammate Brandon Sutter started calling him last season, finishes his Penguins career with 76 goals, 92 assists, 168 points in 372 games. He added 27 points (12G-15A) in 76 playoff game, with 13 of those points coming in his last 22 postseason contests.

“Tyler Kennedy has done a great job for us and helped us win a Stanley Cup. I really think with where he is in his career, he needed a change,” Shero said. “We didn’t have a first- or second-(round) pick. There were several teams with interest in him. San Jose had the best second-round pick on the table. We did that for both us and Tyler.”

Size/Strength – Good
Athleticism/Ability – Excellent
Glove – Very Good
Blocker – Very Good
Lateral Movement – Very Good
Scouting Report:
Jarry played the year behind one of the top goaltenders in all of Major Junior Hockey but still managed to showcase himself incredibly well when his opportunities arose. He is very focused and confident goaltender with great low reactions and quick lateral movements. He has excellent rebound control with his pads and has gotten the reputation as a kid who just stops pucks.