The Penguins and Flyers are really showing off their true feelings for one another this evening… follow the action here, as I am live at the CONSOL Energy Center… 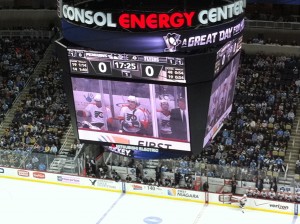 As usual, this in game blog will be a collection of hijinx, observations, thoughts and random analysis of what we are seeing live from the CONSOL Energy Center…

Well, lookie here! Not more than 6 seconds into a little thing that I like to call Cross-State Hate, Matt Cooke and Mike Richards dropped the mitts and gave the SRO crowd a nice little spat to get things going… then before I could get the sentence typed Deryk Engelland and Jody Shelley went all Bobby Flay and went for a throwdown of their own.

Engelland has been running through the league’s tough guys letting them know that he is a viable option to take over that role for the Penguins. Eric Godard has got to hate seeing that happen, as it is quickly making him a luxury the Penguins no longer can, nor will need to afford. Engelland broke Shelley’s eye open during the fracas and the blood was flowing like crazy by the end of the brawl.

This game has the makings of one that will that will be a barn burner… at least for the penalty minute operator! There have already been 30 penalty minutes in the game and we are barely through 3 minutes!

The Flyers were just whistled for another trip, this time on Sidney Crosby…  unbelievable amount of penalties being called thus far! They are playing some shinny… 3 v 3 hockey…

Brooks Orpik just delivered a new fresh jersey to Deryk Engelland, as his last one was sullied with the blood of Jody Shelley!

The Penguins have taken an early 1-0 lead on one of the prettiest plays that I have seen the team make this season… Geno Malkin found Kris Letang in the neutral zone with a pass, Letang carried it into the zone, fed Mike Comrie, who went right back to Malkin, who quickly slid the biscuit to Letang who went to the goal and finished the play. Crazy tic-tac-toe and back to tic goal!

I just received a text from our good buddy Heath that read: “Letang to the wing? 😉 E5” – Tremendous!

It is worth pointing out that my partner in crime, @onesmugpug is in the house with his daughter this evening. They made the trek from Rochester New York and it is their first time in the new barn. From what I can tell, both have been wowed to this point! He is also active in his twitter feed as far as I can tell, so follow along with them as well!

I also feel it necessary to point out that Vinny K is tearing it up on the boom box tonight… we have already had a ton of Metallica, Megadeth, Anthrax, Holy Diver cover, Pantera and much more. INSANE. This guy is clearly craving the BIG FOUR in the United States… keep it up my friend…

The first period has come to an end… the Penguins will have :36 seconds remaining on their power play when play resumes in the second.

The Birds are outshooting the Flyers 10-4… Malkin is leading the way with 2 shots on goal. Though many folks think he needs to shoot more, he has been leading or amongst the leaders in the category all season long.

Marc Andre Fleury had a good period. Though he only faced 4 shots, he stopped the first one, which is a big step. It wouldn’t have been a good thing if the trend of allowing the first goal on the first shot had continued here. It is worth noting that this crowd has been very supportive of the Flower this evening… cheers, signs and love for the kid from Sorel all around! Great to see…

MAF seemed to gain some confidence as the period went on and even came a ways out of his net to play a couple of pucks during the power play. Let’s hope that this Halloween game against the Flyers is what the Flower needs to exorcise whatever demons have been plaguing him. 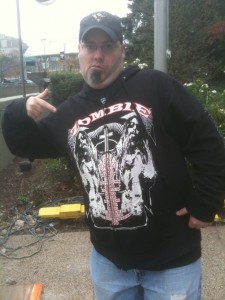 Notice that sweat shirt and cap combo… there is a reason this kid and I hit it off immediately! Welcome home brother…

During recent games I have been lucky enough to sit next to Joe Starkey… great sports convo to be had each time!

The second period is about to begin and we have already had 34 PIMs in the game… wonder what we will finish with?? My guess is 42….

Daniel Briere was just whistled for high sticking and the Penguins are back on the power play… can they open this game up a bit? We shall see…

WOW… shorty for the Flyers… Mike Richards was almost in alone, but Kris Letang made a great play to knock the puck off of his stick. Unfortunately for Marc Andre Fleury a late man got the puck over to a streaking Claude Giroux, who made a beautiful move before roofing the puck into the top left corner. Fleury couldn’t do much there, it was an amazing shot. Giroux is a special kid…

The Penguins again went off-side… that is something that they do far too often, especially when Malkin is dipsy doing with the puck… guys just never know when he is going to cross the line with it and go off… this time Geno shot the puck around the boards with disdain and came close to shooting it at the referee…

The Penguins got another chance on the power play and did their best to give up another short handed goal… luckily MAF was on the scene with a couple of big saves including a huge glove stop….probably his best of the season. It earned him a little friendly ribbing from Mike Richards, as the two exchanged smiles following the whistle.

Dare I say… Marc Andre Fleury seems to be using this game to get himself back in shape. He has made at least 5 stops on the night that looked like shots that have beaten him earlier in the season. He is staying on his feet, squaring up on shooters and making the saves…

Well… there is one that MAF probably wants back. Matt Carle just flipped a puck towards the net from the left point and Dan Carcillo got a blade on it redirecting it just enough to squeak through MAF’s pads. I normally wouldn’t consider a tipped goal a bad one, but Fleury was still very much in position to make the stop.

Getting back to the music… we have also had a healthy dose of Thriller, Monster Mash, Rocky Horror Picture show etc… been a great Halloween vibe in the building!

Jeff Carter has a game high 4 shots on goal through two, while Kunitz and Comrie are leading the Penguins with 3 a piece. Five other players are tied at 2 shots a piece…

For the record, I thought it was fabulous that Jimmy Fallon had Gwar on his show last night… the Scumdogs played Zombies March…

I know that the story hasn’t necessarily been a good one for Mike Comrie, but the guy can pass the puck. He just set up at the goal line and slid a great pass to Alex Goligoski… unfortunately Go Go put the puck into Bobrovsky’s pads.

Hey Vinny, you had me at “Henry Rollins,” awesome!

The game has officially hit 42 PIMs! If you read above, that was my guess! I could be the big winner… we shall see…

The Penguins power play again wasn’t able to MUNSTER (see what I did there) much of anything.

A too many men on the ice penalty for the Penguins immediately converted into a power play goal by Claude Giroux. The Penguins are now down 3-1… not a great situation for them to be in with 9 minutes remaining in regulation. The Birds are sitting at 0-6, with a shorty against, while the Flyers find a way to get it done with the extra man.

We are down to 5:35 remaining in regulation… who you got? Who do you got? Looking like the Orange Crush is in position to take their second in the CEC…

I am about to head down to the rooms… we shall see how this turns out! Look for more post game…