The Penguins, Malkin, and Neal keep the ball rolling in the right direction with their 6th consecutive victory. 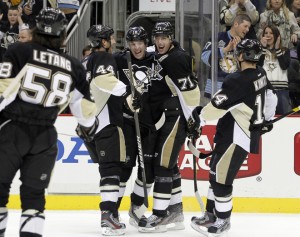 It is rarely a treat to get up and down to the Consol Energy Center on a Sunday morning; however a performance like the one the Penguins put forth today somehow makes it worth it. Sure they did their best to give this game away to the Capitals, who they haven’t beaten in Pittsburgh for close to three years, but again… they found a way.

It is no surprise that at the root of finding their way was the line of Evgeni Malkin, James Neal and Chris Kunitz. Though the team has been playing much better as of late, it is a rare victory that hasn’t funneled straight through those three guys.

Though we have seen that line dominate on an almost nightly basis, Evgeni Malkin deftly deflected the praise once again as I asked him about his unit.

Though the Penguins did a nice job of handling Ovechkin during the first period, he did get loose a bit during the second and third periods, as he notched his first 3-point effort of the season — the third coming in the form of a go ahead goal at the 1:08 mark of the third period.

The Ovechkin tally might have been enough to earn a victory against the Penguins a few weeks back, but it wasn’t going to do the trick today, as Malkin, Neal and Kunitz were not going to let that happen.

“Two guys go to Geno in the corner there,” James Neal said of the tying goal, his second of the game. “A good little five foot pass there, try to find that soft spot. Kuni goes in front, screens the goalie for a quick second and gives me a chance to get a quick shot off.”

Neal, who is in the middle of a career season and is one goal off of tying his career high for a season, has been downright effusive in his praise of Evgeni Malkin. He doesn’t think he has ever had this type of chemistry with any player to this point during his career. 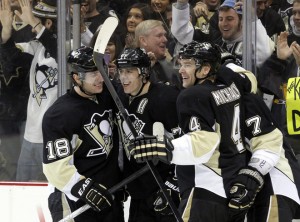 “No, we’re feeding off each other,” said Neal. “[Just] go to a soft spot and he’s gonna find you.

“I just try to get him the puck with speed at all times. You know he drags guys to him and a lot of give and gos, a lot of little plays to try to keep our speed. It’s a lot of fun to play with…he’s an unbelievable player.”

The rest of the team has seemingly fed off of the chemistry of the first line and the big moments that they have been creating. It has really galvanized this group and the vibe around the team has changed significantly. Sure, winning is a big reason for that, but the attitude has turned. It is easy again easy to believe that each guy in that room has the next guy’s back, where as it might not have been so in the not so distant past.

Of course moments like Tyler Kennedy stepping up in a big way during a fight with Troy Brouwer and looking like Rocky Balboa in his desire to win along with Alex Ovechkin throwing a flying elbow at Zbynek Michalek’s head tend to get everyone on the same page.

Most in the room were impressed with Kennedy’s battle during the fight with Brouwer, but were pretty concerned about the non-call on the elbow to Michalek. Michalek himself was the most unsettled, especially because he was called for an elbowing penalty of his own one shift later.

“Yeah, it’s not the first time he hit me or hit somebody else like that and I guess some players are more protected than the others,” said Michalek. “It should be an even field, next shift I took a penalty and it was a good call. I elbowed the guy and I just told the ref if he makes the call on me he should have made the call on him too. It’s even worse play tonight and he didn’t call. It should be even no matter who makes the hit.”

That situation aside, it was all smiles in the room as the Penguins rolled to their sixth straight win — their first six-game winning streak since winning 12 straight games between Nov. 17 and Dec. 11, 2010.

The Penguins meet the St. Louis Blues on Tuesday evening, their final game before heading into the All-Star break…

Today’s win breaks the eight-game home winless (0-6-2) stretch against the Capitals dating back to their last home win over Washington on Dec. 27, 2007 (4-3, OT). Each of the four matches between the Penguins and Capitals this season were decided by one goal. 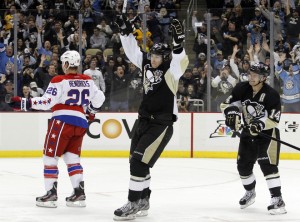 Pittsburgh outshot the Capitals, 27-20, the 13th-straight game they have outshot their opponent.

Pittsburgh improved to 18-6-3 when recording the first goal of the game and 9-3-1 when tied after two periods.

Evgeni Malkin scored his league-leading seventh game-winning goal at 1:31 of overtime.  Combined with his two assists, Malkin increased his league scoring lead to 58 points (26G-32A).  Malkin extended both his goal and point streak to six games, during which he has accumulated 13 points (9G-4A). This ties the longest goal-scoring streak of Malkin’s career (Oct. 18-Nov. 1, 2006).

James Neal is just one goal shy of his 100th career. His next goal will also tie his career high of 27.

Marc-Andre Fleury made his 21st consecutive appearance in today’s game against Washington, increasing the longest consecutive-games played streak of his career. Today’s win places Fleury third (tied) in the league with 25 wins.

Kris Letang’s power-play goal opened today’s game against the Capitals. Letang now ranks fourth on the team with 11 power-play points (2G-9A).   The score was Letang’s third goal in his first three games since returning from injury on Thursday against the NY Rangers.