Neal nor Niskanen score, but the Penguins earn a point on the strength of two Tyler Kennedy goals. 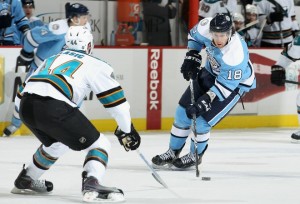 The Penguins didn’t come away with a victory, but they did come away with a very valuable point against a pretty formidable Western Conference opponent. Unfortunately, the game might have come at a cost, as they lost defenseman Brooks Orpik late in the first period when he blocked a Patrick Marleau shot.

There was no definitive answer on Orpik’s status and head coach Dan Bylsma didn’t expect to have an update until tomorrow morning.

Losing Orpik pressed newcomer Matt Niskanen into more playing time than the team had originally planned for him, as they were forced to finish the evening with just five defensemen. Overall, that situation worked out pretty well for the Penguins as Niskanen played a fairly solid game. His only gaffe being a turnover late in overtime that resulted in a Patrick Marleau breakaway that Marc Andre Fleury was able to glove.

Bylsma was also happy with what he saw from his new power forward.

“You saw flashes of James Neal’s game in the offensive zone, the shot he had,” said Bylsma. “He showed he could skate as well… he had a couple big hits on the forecheck and they both contributed and showed what they could do.”

Though everyone was waiting to see what the newcomers would bring to the line-up this evening, it was an oft forgotten member of the team that was responsible for helping the Penguins earn a much needed point this evening – Tyler Kennedy.

Kennedy scored two more goals and they were a bit uncharacteristic of the kind he typically has been known for over his career. Kennedy didn’t notch these goals streaking down the wing or on a spin move in the face-off circle. He went to the tough areas of the ice and knocked in a couple of dirty goals from in the blue paint.

“That’s where maybe TK has not gone in the past to get goals,” Bylsma said. “You have seen him take a shot from the wing to get goals… he hasn’t always gone to the blue paint and tonight you saw him do that twice.”

Bylsma said that was the team’s plan heading into the game this evening, especially based on the fact that they were playing Niemi. Getting rebounds and pucks off of his pads was something that they talked about heading into the evening and Kennedy, Conner and several other members of his team picked up on that.

Though the Penguins lost a heartbreaker with just :04 seconds remaining in overtime, they were able to salvage a huge point and that seemed to be a victory of sorts for this team.

Hopefully efforts like this will continue when the team starts to get healthy, as they will start to see an influx of their NHL level talent returning over the next few weeks.

Dan Bylsma seems like a man on a mission. He was asked point blank post game how many “big hits” his team is going to be able to withstand while still maintaining this level of effort against quality teams. His answer: “We’re going to show you…”

James Neal finished the evening a +1 with 2 shots on goal. He was also visibly winded following the game. He chalked it up to two days of travel and getting acclimated to the system. Many guys tend to discover that Bylsma’s system is one that requires a lot more skating than they might previously have been used too.

Patrick Marleau finished the game with 2 goals for the Sharks, including the game winner in overtime.