Just wanted to pass along some recent news releases from the Penguins. They have added another good hockey guy to their scouting staff in the form of former Ottawa and Florida GM Randy Sexton. They have also inked a couple of depth forwards, Brett Sterling and Ryan Craig.

Just wanted to pass along some recent news releases from the Penguins. They have added another good hockey guy to their scouting staff in the form of former Ottawa and Florida GM Randy Sexton. They have also inked a couple of depth forwards, Brett Sterling and Ryan Craig.

First, the signing of Ryan Craig. Purely a depth move. You will see a number of these kinds of signings as we move into the summer. They are filling out the depth chart, while at the same time ensuring that the rosters of Wilkes Barre-Scranton and Wheeling are full and ready to head into the season.

Craig isn’t a big scorer, but he has nice size and will bolster the WBS line-up…

The Pittsburgh Penguins have signed forward Ryan Craig to a one-year contract, it was announced today by executive vice president and general manager Ray Shero.

Craig, 28, has played the last five seasons with the Tampa Bay organization after the Lightning selected him in the eighth round (255th overall) of the 2002 NHL Entry Draft. In 184 career games, Craig has totaled 32 goals, 31 assists and 63 points. He’s also appeared in 11 postseason contests with Tampa Bay.

The 6-foot-2, 220-pound forward spent the majority of the 2009-10 season with Tampa Bay’s top minor-league affiliate Norfolk in the American Hockey League. In 73 games for the Admirals, Craig recorded 45 points on 23 goals and 22 assists.

The Penguins then inked Brett Sterling. Sterling has long been one of my favorites to follow in the AHL. He has a nice scoring touch that hasn’t seemed to translate to the NHL level, but will be a nice get for the Baby Pens. It will be interesting to watch a guy like Sterling play with the Penguins talented centers during training camp…maybe they could catch lightning in a bottle with a guy who has put up some healthy goal totals in the American League. 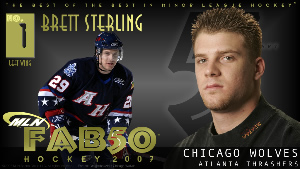 The Pittsburgh Penguins have signed left wing Brett Sterling to a one-year contract, it was announced today by executive vice president and general manager Ray Shero.

Sterling, 26, has played in 19 NHL games with the Atlanta Thrashers, recording two goals and four points.

Sterling, who was originally drafted by Atlanta in the fifth round (145th overall) of the 2003 NHL Entry Draft, has played the majority of his career with Atlanta’s top-minor league affiliate, the Chicago Wolves of the American Hockey League. In four seasons with Chicago, Sterling scored 144 goals, 119 assists and 263 points in 254 games. He chipped in 14 goals and 30 points in 40 playoff contests for the Wolves.

Sterling tallied 55 goals and 97 points in his first season with Chicago in 2006-07. His 55 goals led the AHL, and he was awarded the Willie Marshall Award (goal-scoring champion) and Dudley “Red” Garret Memorial Trophy as the top AHL rookie. Sterling was named to the All-Rookie Team and an AHL First-Team All Star, as well as winning the All-Star Game MVP, in 2007.

The Los Angeles, California native played two years for the United States National Development Team from 2000-02. He represented his country in three tournaments, twice winning gold. Sterling’s nine goals and 12 points in eight games helped the U.S. Under-18 team capture its first-ever gold medal at the 2002 Under-18 World Championships. He also participated in the 2003 and 2004 World Junior Championships. Sterling scored three goals in the 2004 tournament to lead the United States to a gold medal.

Sterling (5-foot-7, 175 pounds) played four collegiate seasons with Colorado College. During his college career he totaled 108 goals and 184 points in 149 games. He finished as a Top 3 finalist for the Hobey Baker Award after posting 34 goals and 63 points in his junior campaign.

Last but not least, the Penguins today announced the hiring of Randy Sexton. Sexton will serve as the Assistant Director of Amateur Scouting. He is a very experience hockey guy and has served as the General Manager of two NHL teams. He is another good asset for Ray Shero to have acquired…

Randy Sexton, the former general manager of the Ottawa Senators and Florida Panthers, has been added to the Pittsburgh Penguins hockey operations staff as Assistant Director of Amateur Scouting, it was announced today by executive vice president and general manager Ray Shero.

Sexton will work closely with Director of Amateur Scouting Jay Heinbuck and his staff in overseeing amateur scouting in North America and Europe.

Sexton, 50, joined the Florida organization as assistant general manager in 2007 and was promoted to general manager on Oct. 2, 2009. As general manager of the Panthers, Sexton oversaw all contract negotiations, pro and amateur scouting, player development and all hockey administration matters.

Sexton spent four years (1992-96) with the Ottawa Senators organization serving as the club’s president, chief executive officer and general manager. Sexton began working in 1988 to bring an NHL team back to Ottawa, and was one of three founders of the Senators franchise – which entered the league in 1992.

Prior to joining the Panthers, Sexton spent three years as the executive director of Capital Sports Management Inc. (CSMI), a sister company to the Ottawa Senators Hockey Club. While with CSMI, Sexton provided strategic analysis and advice to the Senators organization.

Born in Brockville, Ontario on July 24, 1959, Sexton completed his post-secondary education at St. Lawrence University, playing for the varsity hockey team from 1978-82. He served as an assistant coach with St. Lawrence from 1983-85, while also handling scouting and recruiting responsibilities. He also earned a Masters Degree in Business Administration from Clarkson University.