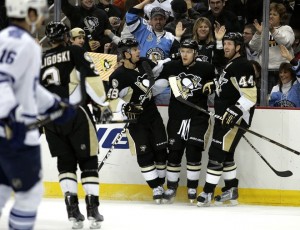 Though the Leafs made a heroic attempt to come back in the third period, it was business as usual for the Penguins as they pushed their winning streak to 11 games in a row. That wasn’t the only streak that rolled on tonight, as Sidney Crosby extended his scoring streak to 17 games with two more goals.

The Penguins pretty much controlled the first forty minutes of play and took advantage of Maple Leafs mistakes en route to a 4-0 lead as the teams headed to the locker rooms for the second intermission. Those mistakes resulted in a Crosby goal off of a puck that probably could have been cleared, a Pascal Dupuis goal on a short handed two-on-none break, a Mark Letestu goal from the high slot that was at first defended by the Leafs, and another Crosby goal on a two-on-one.

The odd man break goals above were both assisted by Chris Kunitz who is seemingly just as hot as Crosby over the past couple of games. He finished the evening with 3 assists and was named the number one star of the game. He was all smiles post game, especially when he overheard the gathered media talking to Dupuis about their short handed two-on-none.

“I said I was sorry, I mean, I fake passed and then I put it in… but he was the first star tonight,” said Dupuis when asked about the look he shot Kunitz following his goal. “I didn’t want to take anything away from his game.”

The follow up questions were also priceless as he was asked, “So you are sorry for scoring highlight reel goals?” as the gathered media and Dupuis broke out in laughter.

Kunitz didn’t seem to mind that his line-mate finished off the play, in fact he was very humble about it.

Though the Penguins did control those first forty minutes, that all changed during the third period when they seemed to lose a little bit of focus and played into the hands of the Leafs. They started to react to the agitation of players like Colby Armstrong, Mike Komisarek and Jay Rosehill. Those reactions led to a number of penalties and several Leafs power plays that ran almost consecutively.

The Leafs didn’t take long to pounce, as they were able to work the puck in the Penguins zone for almost the entire four minutes of penalties that were assessed to Sidney Crosby for roughing and cross-checking penalties. Tyler Bozak chipped in a rebound from in front of Marc Andre Fleury and it seemed to give the Blue and White some life. They started to control play and looked like a different team and it resulted in another goal just :43 seconds later off of the stick of Mikhail Grabovski.

The Birds seemed to settle down a bit after that and got a huge insurance goal from Mark Letestu, his second of the game, and they rode off into the sunset with their eleventh win in a row.

The results were very favorable, the team and Dan Bylsma realized that they got away from their game a bit in the third period and it was a topic of conversation on the bench after the first Leafs goal.

“Even before the second goal, the talk on the bench with the guys and playing the game, we’re talking about we had to be better than what we we’re playing, and executing and managing the puck better than we have been,” said head coach Dan Bylsma. “Unfortunately we have up that second goal and then had to kill off that penalty, so we weren’t going to change at that time. We talk about killing that penalty and getting back to playing the right way, which we kind of got away from a little bit.”

Overall, it was a great learning experience for a team that has been playing some great hockey as of late. Bylsma went on to say that it would be addressed tomorrow when the team hits the ice for practice.

“There were a few times in the second too, that we’re going to talk about tomorrow,” said Bylsma. we were out there against their top players and didn’t do the right thing. That carried over into the third period. Then getting six power plays, we’re in the game for two and have three. I didn’t like that particular predicament for our team. We didn’t do the right things with the puck to make sure we were playing the way that we needed to play. We didn’t have a good third period and that’s something that we’ll certainly look to get better at.”

With his two goals, Crosby now has 26 goals and 50 points in 30 games. Inevitably the talk was ramping up in the press box about a possible run at 50 in 50…. if Sid is able to pull it off it would happen on January 26, 2011. In case you are keeping track at home. However, that is a tall order even for 87… we shall see.

The Penguins were shorthanded for 9:40 in the game, most of which occurred during the third period.

Crosby finished the evening winning 19 face-offs and losing 7 which was good for 73%.

Letestu also led the Penguins with 5 shots on goal.

Phil Kessel led the Leafs with 5 shots and came close to burying a couple of them.

Luke Schenn finished with plus-1 rating… pretty impressive considering how the game went.

Crosby tangled early in the contest with his friend and former teammate Colby Armstrong… looked like some words were flying with the punches, but I am sure the Christmas cards will still go out.

Mike Komisarek made the bush league play of the evening when he scoop slammed Mike Rupp during a third period fracas. The two were tied up and Komisarek reached down, grabbed Rupp behind both knees, scooped and slammed him back first onto the ice. Could have been an ugly incident, but no one seemed to be that concerned post game as no one was hurt.

Quote of the night:

Sidney Crosby talks about jumping out to a lead only to watch the Leafs score a couple in the third:

Crosby goes on to talk about the fans chanting MVP for him this evening: