Here are a couple press releases that came across my desk over the last two days. Sorry for the delay in getting them out, but as you have all probably seen, I have been concert mode for the better part of 48 hours.

Here are a couple press releases that came across my desk over the last two days. Sorry for the delay in getting them out, but as you have all probably seen, I have been concert mode for the better part of 48 hours.

First it was Sir Paul McCartney on Wednesday evening as he opened the CONSOL Energy Center with a bang! Then it was Ozzy and friends out at the First Niagra Pavilion for the Ozzfest. We had tons of fun at both events…

You can see some pics and videos from each event on our official facebook page. I will be adding more later…

In the meantime here is are the releases that have come along. First of all, the Penguins usually pick a different group of their alumni to honor during each summer’s Penguins Alumni Charity Golf Classic and this year it is the goalies. I am a bit surprised that Tom Barrasso isn’t on the list, but when it comes to Tommy B, nothing should shock us…

Former Coaches & Players Tee Off for Charity on August 24

More than 30 former players, coaches and general managers will be on hand as the Penguins Alumni Association will pay tribute to goaltenders throughout the team’s history.  The event raises funds for local children’s charities.

Proceeds from the event will benefit Achieva, the Mario Lemieux Foundation and the Western PA School for the Deaf.  Over the past 12 years, the event has donated over $300,000 to charity.

“It will be a wonderful time for reminiscing with old teammates while assisting a variety of children’s charities,” stated Penguins Alumni Association President Warren Young.  “The alumni membership looks forward to this event each year.”

Each foursome will be accompanied by one Penguins alumnus as they compete in the scramble-style tournament for prizes.  In addition to 18 holes of golf, the event includes a cocktail party, dinner and silent and live auctions.

Speaking of alumni, the team is bringing back a member of the alumni to fill a vacancy on the Wilkes Barre-Scranton coaching staff. Alain Nasreddine has been added to the staff as an assistant coach. It is great to see him come back to the organization, as he was always a great help with the youngsters while he was here. I still have a bit of a foul taste about the way his time here ended. He left the line-up to be with his wife during the birth of one of their children and never got his job back… I guess that is life in the big NHL city…

Here is the release…

The Pittsburgh Penguins have named Alain Nasreddine assistant coach with Wilkes-Barre/Scranton of the American Hockey League, it was announced by executive vice president and general manager Ray Shero.

Nasreddine, who played 15 years of professional hockey as a defenseman – which includes five seasons with the Penguins organization, will be making his coaching debut this season.

Nasreddine played in 249 contests for Wilkes-Barre/Scranton, totaling 55 points on 13 goals and 42 assists. He added seven points (3G-4A) in 57 postseason games, and helped the team earn two berths in the Calder Cup Final in 2003 and 2007.

Nasreddine, who was originally drafted by Florida in the sixth round (135th overall) of the 1993 NHL Entry Draft, played for four NHL teams in his career – Chicago, Montreal, NY Islanders and Pittsburgh – and posted five points (1G-4A) and 84 penalty minutes in 74 games.

The Montreal, Quebec native also saw action in 850 combined games with Carolina, Portland, Fredericton, Quebec, Hamilton and Bridgeport of the AHL and Indianapolis of the International Hockey League. He played the last two seasons with Nuermberg of the German Elite League.

Also, for all of those who got up in arms over the fact that Sir Paul McCartney was sporting a “winged wheel” on his guitar on Wednesday evening…well, he rectified the situation last night… 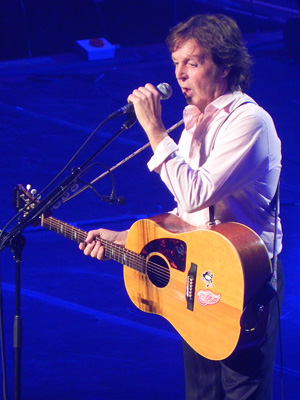