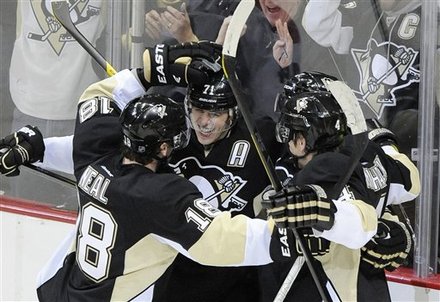 Dan Bylsma seemingly abandons his “All-Star” configuration on the power play and opts for something a bit more familiar.

If the Penguins’ game day skate at Madison Square Garden this morning is any indication, the coaching staff has finally abandoned a power play that has gone zero for its last 12 attempts.

Coach Dan Bylsma and company made some changes to the unit that included what amounts to a swap of James Neal and Evgeni Malkin.

Malkin, who has spent plenty of time over the past few years manning the point with the extra man, will return to that spot. Neal slides back down in the configuration, playing near the top of the circle, where he scored a league-leading 18 power play goals last season.

“I had success on the power play in that spot last year,” Neal told the Penguins’ official site this morning. “It’s a spot I’m familiar with and I feel comfortable. I’m more comfortable there than on the point.”

Neal’s discomfort, along with playing Malkin out of position, was really disrupting the flow of the power play and resulted in the 0-fer mentioned above. The move also seems to be sitting well with the league’s reining MVP.

“I’m playing the point right now. I’ve played the point before,” Malkin said to penguins.nhl.com. “I’m a good playmaker. I can pass to ‘Sid’ or ‘Tanger’ for a one-timer. I hope it works.”

Geno isn’t the only one hoping it works, as his coaching staff has been left scratching their heads when trying to figure out what was wrong with the unit. Bylsma inexplicably made the changes to the unit during the Penguins abbreviated training camp and was rewarded when the configuration produced five power play goals on its first 10 attempts this season. Sadly that success vanished quickly and the discomfort on the unit was obvious.

Bylsma doesn’t seem to think that his use of personnel was the cause of the unit’s ineffectiveness, so much as the fact that they weren’t really able to get set up in the zone.

“It’s more that we haven’t really had a set to our power play as of yet,” Bylsma said earlier today. “We haven’t had a lot of zone time, we haven’t been in situations where we’ve been able to establish that position in the offensive zone. This particular set gives us a better chance to get set up and have our power play from the top better than it’s been to this point.”

A case could be made that when the unit did finally get set in the zone, they focused too much on cycling and misdirection, rather than puck possession, but they really weren’t in zone enough to say that was indeed the case.

The new look unit sounds like it will function an awful lot like the one helped Neal notch those 18 power play goals last season, which can only be looked at as a positive.

Chris Kunitz wasn’t on the ice this morning in New York, so his position was filled by Eric Tangradi on the top line and on the top power play unit. He worked in front of the net on the power play.

The combos per Pens site shook out as such: