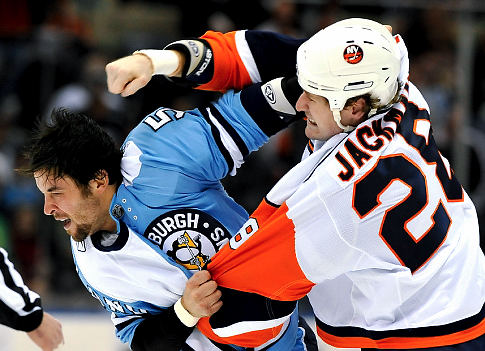 The Penguins have extended enforcer/defenseman Deryk Engelland. Great news for the 28 year old who is in his first full season in Pittsburgh. Engelland has been a steady force on the Pens blue line all season long and is quickly becoming one of the best fighters in the league.

The Pittsburgh Penguins have signed defenseman Deryk Engelland to a three-year contract extension, it was announced today by executive vice president and general manager Ray Shero.

Engelland, 28, is in his first full season with Pittsburgh. He has posted five points (2G-3A) and a team-leading 76 penalty minutes in 32 games. The 6-foot-2, 202-pound blueliner made his NHL debut last year with Pittsburgh, playing in nine games and recording two assists and 17 penalty minutes.

Engelland, who originally signed with the Penguins organization as a free agent in the summer of 2007, played the previous three seasons with Wilkes-Barre/Scranton of the American Hockey League. In 231 career games with WBS, he posted 42 points (10G-32A), a plus-11 rating and 402 penalty minutes. Engelland appeared in 39 playoff games with WBS and helped the team earn a berth in the Calder Cup Final in 2008.

The Edmonton, Alberta native was originally drafted by New Jersey in the sixth round (194th overall) of the 2000 NHL Entry Draft. He has played with WBS, Lowell and Hershey of the AHL, and Las Vegas, South Carolina and Reading of the ECHL during his career.