A collection of thoughts, observations, analysis and hullabaloo live from the CONSOL Energy Center… 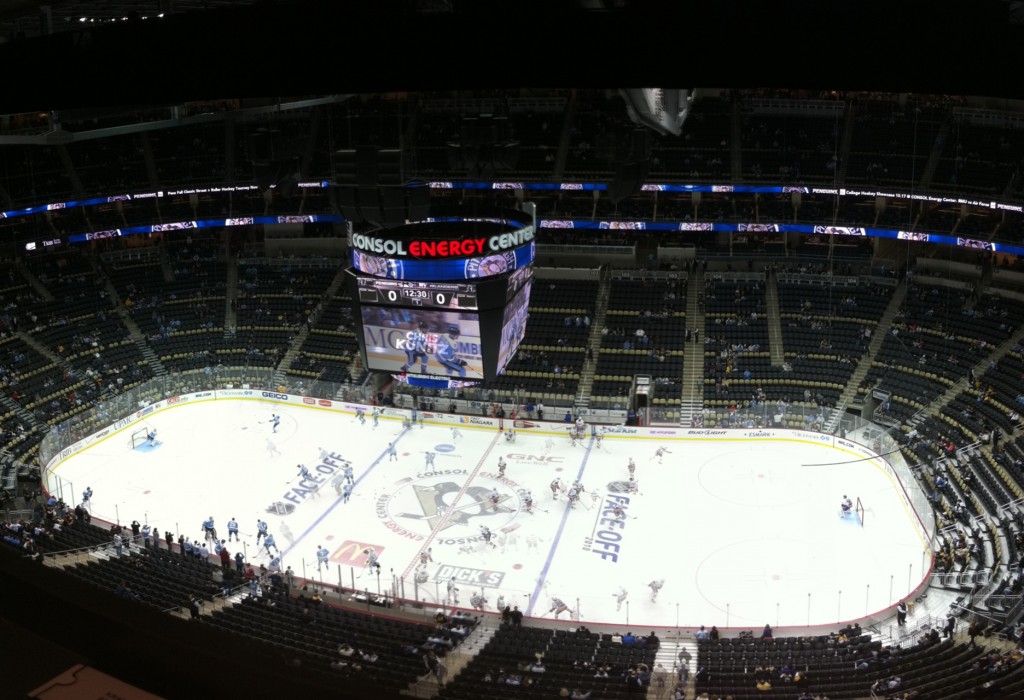 Greetings everyone and welcome to another collection of thoughts, observations, analysis and hullabaloo. Sorry for the late start this evening, but I was delayed in getting set up here in my perch and it has thrown the entire evening off track.

We are at the 12:35 mark of the first period and the Penguins have taken a 1-0 lead on a goal from Arron Asham. Asham is again playing on a line with Evgeni Malkin and went to the net. Malkin shot a puck into the slot area that bounced around a bit and Asham knocked it in behind Tim Thomas.

The interesting thing about watching Thomas in person for the second time in a week is that he is very vulnerable side to side. When the Bruins keep the area right in front of him clear, he is fantastic, but when there is traffic and bouncing pucks, you can beat him. I watch the Capitals do it to him on Friday night and I am saw it again here on Asham’s goal. Thomas is playing some of the finest hockey of his career, but when you get him moving around a lot, he isn’t comfortable. That could be his undoing if his team doesn’t play the way they need to in front of him.

The emotions have been running pretty high here tonight, as there have already been two throw downs. First of all, we had Eric Godard going with Shawn Thornton. The fight was a spirited one, though neither player ended up with the upper hand. It was one of the longer fights that I have seen recently.

Then it was Max Talbot and Gregory Campbell. Talbot eventually took the upper hand, as Campbell seemed to loose his footing a bit.

An old friend has tied things up for the Bruins, as Mark Recchi knocked in his own rebound from the right of the crease during a power play. Tyler Seguin stole the puck from a Penguin behind the net and walked out before sliding a pass across to Recchi. His initial shot was stoppedby Brent Johnson, but he stayed with it and roofed his rebound.

The scratches for tonight’s game: Deryk Engelland, Mike Comrie and Chris Conner for the Penguins. David Krejci, Johnny Boychuk, and Jamie Arniel for the Bruins.

Unbelievably, the shots in this game have already totaled 25. The Penguins have put up 15, while the Bruins have notched 10. Not the kind of game that we all expected, especially playing against the Bruins, who have been and always are pretty tight.

Brad Marchand just put the Bruins up 2-1 on a nice shot that sailed past Brent Johnson’s glove hand into the right corner.

The Penguins fire right back with Brooks Orpik’s first of the season. Evgeni Malkin gets his second point of the night and he didn’t even intend to make the pass. He was cutting down the right slot, went to make a move to the backhand and lost the puck. It ended up sliding into a perfect shooting position for Orpik who fired it into the top of the net.

Right now it is: Danzig – Pyre of Souls: Seasons of Pain

The first period is in the books and the teams are tied at 2-2. The bigger surprise is that the teams have combined for 32 shots in the period. As I mentioned above, that is definitely not what I expected from this one. In fact I was looking for something like 6 or 7 shots a piece and a final score of maybe 3-2. Though that could still happen, it certainly looks like these two teams could combine for more than that.

Brent Johnson is finally starting to look human (if it bleeds, we can kill it – says the rest of the NHL)… that isn’t to say that he isn’t still playing good, but he isn’t making EVERY save as he was a couple weeks back. That is the thing with a guy like Johnny, you gotta ride the hot streaks when they are there, but you also need to realize when the streak is winding down. Will be interesting to see how things play out over the next few games.

Hm, maybe the latest tune to pop on the BriPod is a sign for the Penguins… Frank Sinatra – Luck Be a Lady

Malkin has been flying tonight, but just went down in a heap. Definitely didn’t look good… he had just circled the zone and got the puck back near the right face-off dot. He stopped and went to move again and just collapsed. Looked like he was the victim of sniper fire. He got himself up and managed to make it to the bench, but was writhing as the trainer was checking him out…

We shall see what the deal is…

Arron Asham just went all Bobby Flay on Adam Mcquaid… it took him a minute, but he eventually went all berserker on him…

With 9:02 remaining the shots are now 26-18… crazy that the Bruins have yielded so many shots to the Pens tonight. A lot was made about them being more of a trapping team (which they have been under Jules…) but that hasn’t been the case tonight.

Evgeni Malkin just hit the ice for his shift, so I am assuming that he is ok… at least for the time being.

Brooks Orpik is headed to the box for interference… the CONSOL Energy Center crowd seemed none to happy about it as they rained down a heavy barrage of boos!

The Penguins got the kill that they were hoping for and got right back on the attack. After a couple of great chances for Alex Goligoski and Pascal Dupuis, Chris Kunitz got a great bounce puck as the puck came right to his blade in front and he buried it behind Thomas.

Milan Lucic was just knocked into the Penguins bench on a big hit from an unknown Penguin. I couldn’t get a good look at who knocked him off of his skates…

The Penguins just scored with 22.9 seconds remaining in the second period. Crosby and Malkin had what effectively turned into a two on one right below the face-off circles. Crosby tried to feed Malkin, but the puck deflected off of Tim Thomas’ leg and in behind him. Anytime a team scores that late in a period it is a huge goal…

The second period is in the books and the Penguins have taken a two goal lead… the two teams have combined for 54 shots in the game thus far. I don’t mean to keep harping on it, but that is just shocking to me. I am glad to see the Birds getting chances though… this has been a huge game for them on home ice thus far… just need to finish it off, something that they haven’t done much of in this building to this point in the season.

The Crystal Method’s Remix of the Doors – Roadhouse Blues

I am now perusing Rob Zombie – Meet the Creeper as Katie O gives us her latest update on the little kid shoot-out competition. I will tell you, it is much more exciting this way. Though Vinny does an amazing job with the music here, I sort of like providing my own soundtrack!

Or as we used to call it when selecting our own tunes for NHL video game play, our own soundtrack for violence!

Sidney Crosby now has a 3 point (1G-2A) evening… Evgeni Malkin is working on a 2 pointer with 2 assists.

Did I mention that Evgeni Malkin is flying tonight? He really looks like he has some extra hop in his step… hopefully it can last for a few games. Nice to see that kind of effort throughout the evening…

The nacho chips that they provide in the press box are something else… I just heard one crunch over my head phones! What is up with that??

The Bruins have cut the Penguins lead to 1 go… make that the Bruins have tied this one up! Two goals just seconds apart have made this a new game… Tyler Seguin and Zdeno Chara have the B’s thinking COMEBACK win!

Evgeni Malkin just blew himself up in the corner of the offensive zone. He was again flying around the zone and made a quick spin towards the left wing corner. He ran smack into the back of Shawn Thornton and looks like he knocked the wind out of himself. He laid face down on the ice for a minute, before getting himself up and to the bench with the help of the trainer…

The refs have seemingly swallowed the whistles, as both teams have just gotten away with sure calls. I guess that is a good thing in a game that is knotted up with only 10 minutes remaining.

Tyler Kennedy had a two on one with Matt Cooke, but couldn’t get the puck across to him and opted to shoot. Thomas took the puck in the shoulder and covered up. Still tied at 4s.

Shawn Thornton just picked a corner on Brent Johnson on a two on one giving the Bruins a 5-4 lead… they have roared back to score 3 unanswered goals and have the Penguins on the ropes again on home ice.

Ironically, the moment the lead is reclaimed, the referees have regurgitated the whistles and the Penguins almost immediately get a power play. Greg Campbell was whistled for slashing…

* * * * *
Wow… the wheels are really coming off here… the Bruins have scored again to make it a 6-4 game. This is not a good thing for the Penguins… This is the kind of outing that is sure to illicit another closed door meeting.

Defense has been next to non-existent in the third period. Not good… will there be any kind of fall out?

I am heading down to the rooms for reactions soon… will keep you all posted.. more post game…