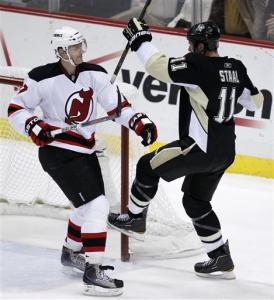 Wow… how on earth did another regular season come to an end?

It really feels like we just opened this building up with a game against the Philadelphia Flyers last week… tough to get my head around the fact that it was actually six months ago! I guess it is just like anything else in life… the older you get, the faster it all seems to blow by.

The Penguins hit the ice against the New Jersey Devils this evening knowing that they could really use the two-points. Not only do they still have an outside chance at winning their division, but they need to keep Tampa Bay from overtaking them for the “four” seed if they would like to hold on to home ice advantage.

Though the Birds have dropped a couple games lately, they did bounce back with a nice victory over the Florida Panthers on Saturday evening. They will be looking to keep that momentum going tonight and I will be bringing you all of the action. At least some thoughts on the action…

The Pens line-up is pretty much a mirror image of what it has been lately and all the usual suspects are on the ice. This is always one of the best evenings of the season for not only the guys on the ice, but the folks in the stands. Not only are their a number of prizes given away throughout the evening, but some lucky fans get a chance to hit the ice post game and win “the shirt” right off of the back of one of their heroes. There will also be an added bonus, as one lucky fan will take home a new car. All of it equals one hell of a thank you from the Penguins to their fans.

We are moments away from face-off… stay tuned.

Unfortunately the Devils have scratched Zach Parise this evening. I was looking forward to seeing him in action for the first time this season. Didn’t get the chance to watch him prior to the injury this season.

We are 13 minutes in and there is still no score. I will say that if the Devils are going to get on the board, I would like the goals/points to come from Jacob Josefson or Nick Palmieri… I have each playing for a team that is involved in a championship match. The league is very deep… 30 player NHL roster, 25 player minor league and prospects that were selected via the entry draft.

Moose Hedberg and his defense did not look to be on the same page during the power play… they almost put one in their own cage during a mishap late in the Penguins PP.

The Devils are headed back to the sin bin and it is Nick Palmieri… the aforementioned member of the Interlopers, who is headed to the box for interference.

Jordan Staal nails a pretty goal moments into the power play to put the Penguins ahead 1-0. Staal came down the wing and made a power move to the net, Hedberg went down a bit early and Staal flipped the puck over him and into the top of the net.

Worth noting that Staal is also skating for the Ruthless Interlopers…

You cannot say that I don’t draft goons… Josefson joins Palmieri on the scoresheet. Both for taking minors in the game. I guess for fantasy purposes it all helps, however each guy was brought on board for their offensive upside.

The Penguins will have 1:00 remaining on a power play when the second period kicks off… will they take advantage of it? The first period PP goal might have them at their quota.

Gotta love it… our guy Cy Clark goes down as #3 in the BIG FIVE for top fan moments of the season. They fittingly dubbed him: “Hulk Hogan Guy!”

One interesting tidbit this evening… when Nick Palmieri took his penalty earlier, he managed to bust a lip, nose or something and was bleeding on the ice. Typically they would have gone nuts getting that cleaned up before allowing play to continue… in this instance they allowed the blood to sit.

The third period is about to get underway here at the Consol Energy Center and the Penguins hold a 2-1 lead. They took the lead on a goal from Pascal Dupuis, who crashed the net and knocked home a rebound shortly after David Steckel had pulled the Devils even.

Can the Birds hold this lead? We shall see…

Chris Kunitz again shows off those deft hands around the goal… he took a feed from Tyler Kennedy as he was cutting across the goalmouth, went forehand/backhand and slid the puck past Hedberg. The Penguins now lead the game 3-1…

The Devils pull back within one goal, as Brian Rolston cashes in from the high slot. He took a feed from Patrick Elias and one timed it past a butterflying Marc Andre Fleury…